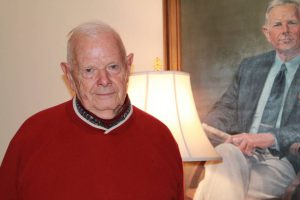 A Celebration of Life will be held at First Presbyterian Church on Thursday, March 17 at 11 a.m. with Rev. John Kinser officiating. Burial is private at Riverside Cemetery. The family will greet friends on Wednesday, March 16 from 5 until 7 p.m. at Snow’s Memorial Chapel, Cherry Street. In lieu of flowers, please make donations to The Neel House, (Federated Garden Club), 730 College Street, Macon 31201.

Joe was born on December 4, 1929, the son of the late Evelyn Juhan Neel and Roland Hall Neel. A lifelong resident of Macon, he attended and graduated from Alexander II in 1943 and Lanier High School in 1948.

He attended Davidson College and graduated from the University of Georgia in 1952, where he was a member of the SAE Fraternity. Joe served during the Korean War as a USAF pilot, flying KB 29s in the early days of midair refueling in the Strategic Air Command.

After serving in the Air Force, Joe joined Joseph N. Neel Co., a family clothing business started in Macon in 1886, by his name sake grandfather. While president of Neel’s, Joe founded the Menswear Retailers of Georgia and got the company in the Guinness Book of World Records, due to Neel’s daily advertisement in the Macon Telegraph for 70 years.