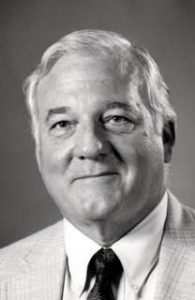 Frederick Lynn  Preyer, 87, of Greensboro died Thursday, March 10, 2016. A memorial service will be held at 11a.m. Tuesday, March 15, at First Presbyterian Church. The family will receive friends following the service in the Virginia Gilmer Room.

Fred was the son of the late Mary Norris Richardson Preyer and William Yost Preyer. He attended the Choate school and Davidson College where he played football and received a B.S. in Business Administration.

Afterward, he served in the U.S. Army being a proud leader of the first racially integrated unit. Later he was elected to the Board of Guilford County Commissioners for two four year terms.

His focus on the commission was to help to provide low-income housing for many and to champion the revitalization of downtown Greensboro. His work for improvements and growth downtown continued until his retirement from commercial-industrial real estate in 2010.

Fred was an excellent tennis player and also played a decent round of golf. Yet his passion was sailing and he spent several years in the Seattle area plying the waters of Puget Sound and those beyond into Canada.

He was a quiet man who welcomed all people into his sphere and was eternally optimistic. He sought out and found the best qualities in all the people in his life and cherished them for the love they gave to him.

The family would like to express our sincere thanks to the many friends who supported Fred and visited with him during his last years. He was humbly appreciative of their many kindnesses.

In lieu of flowers, memorials may be made to the Alzheimers Association, located at 4615 Dundas Dr, Greensboro, NC 27407, telephone number (336) 285-5920, or a charity of the donor’s choice. Hanes Lineberry North Elm Chapel is assisting the Preyer family.

Online condolences may be made at www.haneslineberryfuneralhomes.com.