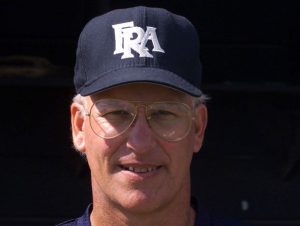 George Weicker died peacefully at home on February 21, 2016 surrounded by family and friends. He was preceded in death by his father, George E. Weicker, Jr. and is survived by his mother, Evelyn Weicker of Boynton Beach, FL; his wife, Lucy Weicker; his son, Woody Weicker; and his daughter, Libby Weicker, all of Arrington, TN.

He is also survived by his beloved Baltimore family: uncle and aunt, Roland and Loretta Knapp, and treasured cousins.

George was born in Baltimore, MD on August 1, 1953. He graduated in 1975 from Davidson College, where he played football and baseball, and was named to the 1975 1st Team All America Baseball Team. He received his Masters of Education degree from Johns Hopkins University.

He played professional baseball for five years, including the inaugural Nashville Sounds team in 1978. He was the hitting instructor at Vanderbilt University when they won the SEC Championship in 1980.

He taught math and coached football and baseball at Franklin Road Academy for 35 years, winning state championships in football (1991) and baseball (1988 and 2000). In 1995, he was inducted into the Davidson College Hall of Fame, and named to the 50 Year All Southern Conference Baseball Team. He was recently inducted to the Tennessee Baseball Coaches Association Hall of Fame.

A Celebration of George Weicker’s life will be held at Brentwood United Methodist Church, 309 Franklin Road, Brentwood, TN, on Saturday, February 27, 2016, at 2:30 p.m. The family will receive friends at the church beginning at 1:00 p.m.

In lieu of flowers, please make donations to Franklin Road Academy Athletics or Davidson College Baseball, or the charity of your choice