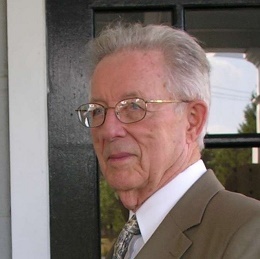 Rev. Robert Caldwell Bradford Jr., 92, passed away on January 15, 2016 after a long battle with Alzheimer’s disease. He was born on Feb. 12, 1923, son of Robert Caldwell and Mamie Alspaugh Bradford of Davidson, NC.

He graduated from Davidson College in 1944. He served in the Army with the occupation troops at the end of WWII. Upon his return, he married Constance Louise Kistler in 1947. He then attended Union Theological Seminary, graduating in 1950.

His first call to the ministry was as pastor of the Opequon group of four churches in Winchester, VA. In 1957 he accepted a call to Maryland Presbyterian Church in Towson, MD.

In 1969 he accepted his final call to Virginia Beach, VA, where he served as pastor of Thalia Presbyterian Church until retirement.  While at Thalia he also served as chaplain at Norfolk General Hospital and traded churches with a pastor from Bathurst, Australia for one year from 1981-1982. In 1986, Bob & Connie returned to Australia following retirement.

Robert is survived by his wife of 68 years, Constance Kistler, and by three of his four children; Robert C Bradford, III of Los Angeles CA , Deborah Stanley of Moreno Valley, CA and Frances Jimenez of Felton, DE. Robert’s daughter Celeste Johnson passed away in October 2007.

A memorial service will be held on Friday, January 22, 2016 at 1 p.m. at Thalia Trinity Presbyterian Churc , 420 Thalia Rd, Virginia Beach, VA. A reception will immediately follow the service.