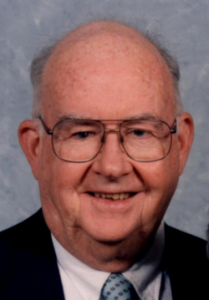 A memorial service for Paul will be held at St. Luke’s Episcopal Church, 1737 Hillandale Road, this Saturday (Jan 30) at 2PM.

Paul’s ancestors from Scotland arrived in Eastern North Carolina in the late 1700s. He was born in Clinton, NC on March 30, 1925 to railroad station manager Paul Harold Starling Sr. and schoolteacher Katie Lee Matthews. Paul considered Fayetteville his childhood home, as many of his youthful misdeeds occurred there in the 1930s.

Around 1937 the Starlings made their last stop in Selma where Paul graduated from Selma High School in 1942. Paul attended Davidson College for one and a half years before joining the Army in 1944, where he met his future wife, SGT Rita Cassidy, at Fort Sam Houston, TX.

Paul and Rita married in 1946 and upon discharge from the Army, settled in the Atlanta, GA area, where Paul completed his college degree at Georgia State University while working fulltime for the Springfield Insurance Company.

During the decade of the 50s Paul and Rita had four daughters before relocating back to Durham in 1962, where Paul worked for the Reliance Insurance Company until his retirement due to vision loss.

Paul, who had lost one eye to cancer at age 4, lost vision in his other eye to a blood clot in 1969, and was legally blind for his remaining 45+ years. He lost Rita in February, 1987 and remarried Lillian Ellis in December of that same year.

Paul and Lillian moved to Chalice Street in NW Durham and, following Lillian’s retirement, balanced their participation in church activities at St Luke’s with cruises on the Mississippi and Ohio Rivers. Paul lost Lillian on the last day of December, 2007, and, astonishingly, lived alone with support from his family and his host of friends until dementia onset forced him into his final stay at Carillon in May 2015.

Paul Starling made many friends throughout his 90+ years, many of whom have preceded him in death. But he was especially proud of his long friendships with his Selma High classmates, his former neighbors in Parkwood, his many long-distance cronies from river cruises, and most importantly, his friends at St. Luke’s, all too numerous to mention by name.

The one word that best described Paul Starling was affable. He enjoyed reading his many books from the Library for the Blind, traveling, and sharing stories, with his family and friends, of past adventures. He will be sorely missed.

His family would like to thank Paul’s many kind and thoughtful caregivers at Carillon and the wonderful folks of Hospice of Alamance and Paul’s close friend, neighbor and fellow veteran, Pat Todd, for his many visits to Paul at Carillon.

At Paul’s request his cremation remains will be divided and placed with his wives – Lillian at St Luke’s Memorial Garden and Rita at the Raleigh National Cemetery – at a later date.

In lieu of flowers, the family requests that donations be made to the Disabled American Vets, PO Box 14301, Cincinnati, OH 45250.

The family is being assisted by Clements Funeral Service, Inc. in Durham. Online condolences may be made at www.clementsfuneralservice.com. ELSEWHERE