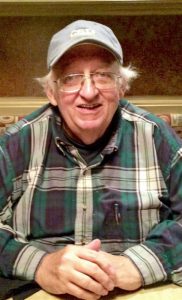 Funeral services for Daniel Johnston McAulay, 70, will be held at 3:00 pm Sunday, January 17, 2016, at Hopewell Presbyterian Church, 10500 Beatties Ford Road, Huntersville, NC 28078 with burial in the church cemetery. The family will receive friends one hour prior to the service in the church and on Saturday evening from 6:00 to 7:00 pm at Pope Funeral Home, 521 S. Congress Street, Winnsboro SC 29180.

Mr. McAulay died on Wednesday, January 13, 2016. Born in Charlotte, he was the only son of the late Olin and Frances McAulay. Daniel attended Greenwood High School, Davidson College, and University of South Carolina. Daniel had a fondness of reading that stayed with him throughout his life.

His friends always remember Daniel wanting to go to the next gun show in town due to his love of old style western guns. His other loves include film photography, drawing, comic books, his days of showing Great Danes, and spending time with his family.

Daniel dedicated over 40 years to the pharmacy profession in the Carolinas. Daniel will be greatly missed by family, friends, and colleagues.

In addition to his wife of 28 years, Barbara Neal McAulay; Daniel is survived by two daughters, Jeanne Hamilton and Emily Frances McAulay.