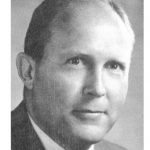 Douglas Dillard, died on Monday, October 26, 2015 at his home. Mr. Dillard was born on March 28, 1919 weighing in at three pounds four ounces to Angela Tinsley and A. Tyree Dillard.

A native of Greensboro, Mr. Dillard graduated from Augusta Military Academy in Stanton, VA and spent two years at Davidson College before entering the armed forces in World War II.

After his discharge from the Army (Armored Division) as a Major, he obtained a Bachelor of Science degree from the University of North Carolina at Chapel Hill in 1946 where he was a member of the Phi Gamma Delta fraternity.

Following graduation, Mr. Dillard began his career in the textile industry in New York City with Burlington Industries and later with the Vasser division of Munsingwear, Incorporated. He moved to Winston-Salem and in December of 1955 joined the Mayo Corporation, which subsequently became Washington Mills and The Washington Group.

He retired as president and a member of the board. Mr. Dillard joined his brother in law at the Ferrell Companies as a commercial real estate broker and investor after his retirement from the textile business.

Mr. Dillard was a faithful communicant of Saint Paul’s Episcopal Church. He was very active in his community where he served on numerous boards including the North Carolina School of the Arts, the Forsyth County Chapter of the American Red Cross as Chairman, the National Board of the American Red Cross, the United Way Board, The Winston-Salem Housing Authority Board as Vice Chairman, the Winston-Salem Sales Executive Club as President, the Sales and Marketing Executives International as an area director, the Salvation Army Advisory Board, the Salvation Army Boys Club Advisory Board and the Senior Services Board.

He was a member of Old Town Club and President of the Stratford Chapter of Rotary International and a Paul Harris Fellow. He was a member of the Huguenot Society of South Carolina and a mason with Kane Lodge 454 Park Avenue in New York City.

The word Gentleman describes Doug, as he was always that, a perfect gentleman. Referred to as Yum Yum by his grandchildren, they all loved nothing better than time spent with “Yummy” hearing tales of his life, discussing current events or getting lessons in history and geography.

He was a little league coach, an enthusiastic traveler, an inveterate reader and historian, a textile executive, a real estate investor but most of all he was a wonderful husband, father, grandfather, father in law, uncle and friend. He had a twinkle in his eye and a smile on his face with those unforgettable dimples through even the most difficult times.

He led by example with his gentle nature and kind heart. We will all miss him terribly. He was preceded in death by his parents, brothers Tyree and James, sister Anne and a stepdaughter Joanne Glenn Meyer.

He is survived by his wife of fifty-eight years Rosena Ferrell Glenn Dillard and their children Vernon Glenn, Paul Glenn and his wife Sharon, Angela Breeden and her husband Ralph and Douglas Perry and her husband Craig.

In addition, he is survived by his ten grandchildren CC, Douglas, Rory, Dillard, Paul, Jim, Wood, Daniel, Crane, Charlotte, and many devoted nieces and nephews. The family would like to thank his numerous caregivers.

There will be a service to celebrate his life at Saint Paul’s Episcopal Church on Thursday October 29 at 2 p.m. The family will receive friends following the service in the Colhoun Room. Burial will be private.