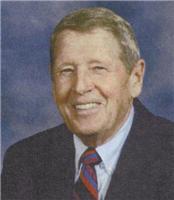 Cecil Davis Dickson, 79, died Wednesday, Sept. 16, 2015, at Hospice at Wendover. A native of Cleveland County, he was the son of the late Brady and Isabel Davis Dickson Sr.
Cecil served as President of the 1954 class of Shelby High School and upon graduation, was made lifetime President. Much of his pleasure was derived from keeping up with former classmates and planning reunions. After high school, Cecil attended Davidson College and graduated in 1958.
Upon graduation he began working with his father at Dickson Auto Supply in Shelby, and that became his lifelong profession. Upon his father’s death in 1963, Cecil operated the business until his retirement in 2009.During his career, he was a member of the NC Automotive Wholesaler’s Association, and served a term as President.
His civic involvement included being a member of the Kiwanis Club, where he served a term as President. Cecil was elected to the Board of County Commissioners in 1992, and during his tenure, he served as Chairman all four years.He was a lifelong member and deacon of Shelby Presbyterian Church.

He enjoyed playing golf, reading, skiing, being with friends and family, and having lunch with his Gambini friends were among his many pleasures in life.He is survived by his two sons, David Scott Dickson of Boiling Springs, and Patrick Ernest Dickson and wife Jennifer of Shelby, three brothers, Ronald Wayne Dickson of Mooresville, Glenn Wilson Dickson of Gainesville, Fla., and Brady Wilson Dickson Jr. and wife Joan of Mt. Gilead; as well as eight nieces and nephews.

The family will receive friends following the service, at the church.

A private family burial will take place in Sunset Cemetery

Memorials may be made to Hospice of Cleveland County, 951 Wendover Heights Drive, Shelby, NC 28150.

Online condolences may be made at www.claybarnette.com.