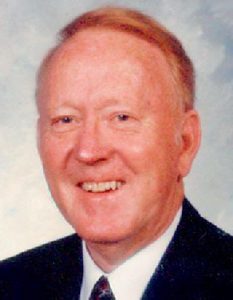 In addition to his parents, he was preceded in death by his loving and faithful wife of 53 years, Sylvia Howe Grissom, and his sister Eva Jones, in-laws Walter Hamilton, Robert Hallman and Hugh Cagle.

Bud was one of six children and is survived by his brother Gene (Kathleen) Grissom of Gastonia, and his sisters Shirley (Vernon Cahoon) of Creswell, NC, Carolyn (Gene) Glaze of Hickory, Judy Stewart of Belmont, in-laws Nathan Jones, Phyllis Hallman, Charlotte Cagle and numerous nieces and nephews.

Bud graduated from Gastonia High School, Presbyterian Junior College, and Davidson College. He earned his Divinity Degree at Columbia Theological Seminary in Decatur, Georgia and was ordained into the Ministry of the Presbyterian Church, U.S.A. in 1957.

During his ministry he furthered his education in order to better serve others by earning a Masters Degree in Counseling from N.C. State University in 1968. Bud served small churches throughout Georgia and the Carolinas until his retirement in 1994.

As a retired Presbyterian Minister, Bud was a life-long learner who valued thoughtfulness and faithfulness and cared for all. Bud will be remembered as a kind, gentle and caring man who seldom raised his voice in anger. He endeavored to always follow his faith and served as an example of Christs love in action to all whom he came in contact with. He truly loved and cared for each and every one of Gods creations.

The family wishes to express their sincere love and gratitude to the staff of Morningside Assisted Living of Gastonia for their love and care of George and our family during the past three years.

In lieu of flowers, memorials may be made to The Presbyterian Mission Agency Funds, The Joy Gift Offering or One Great Hour of Sharing thru Olney Presbyterian Church, 251 Olney Church Rd. Gastonia, NC 28056.

Condolence messages and remembrances may be shared with the family at www.McLeanFuneral.com. McLean Funeral Directors of Gastonia is serving the family of Rev. Grissom. MCLEAN FUNERAL DIRECTORS PO BOX 1544 GASTONIA, NC 28054 704-865-3451