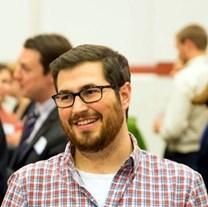 Thomas Arthur Anstrom, of Washington, DC, passed away suddenly on April 8, 2015 at the age of 33. His cause of death was a heart incident related to a long-standing heart condition. Tom was born at GWU Hospital on May 9,1981 and grew up in Alexandria, Virginia. He attended Burgundy Farm Country Day School in Alexandria and Edmund Burke School in Washington, DC.
While in high school, Tom served as a Congressional intern in the office of Majority Whip David Bonior, during which he gained an appreciation for how progressive efforts in politics could make a positive difference. He went on to Davidson College in Davidson, NC, where in 2004 he received a Bachelor’s Degree in History and was selected for the Davidson in Cambridge Program.
He also received a Master’s Degree in Political Management from the George Washington University. Tom’s political heroes were John Lewis and Paul Wellstone, and he drew from them a love for public service and social justice.
He had baseball heroes as well – Jackie Robinson, Hank Aaron, and Lou Whitaker and Alan Trammell and any and all other Detroit Tigers.
Immediately after college, Tom went to Charlotte, NC to work on the Presidential Campaign of John Kerry. He then worked in the Hampton Roads area of Virginia, which was the key to Tim Kaine’s successful race for Governor.
Tom then ran the successful races of Paul Fraim for Mayor of Norfolk and Paula Miller for the Virginia Senate, District 6. He also worked in the Hampton Roads area on the Kellam for Congress Congressional race and in the DC metropolitan area as an account manager for a direct mail firm serving progressive Democratic candidates.
Tom then was a political analyst with The Atlas Project, where he analyzed data and wrote reports on the critical issues and details of a number of key election states. Tom loved the diversity and energy of the City of Washington. Interested in making a difference locally, Tom had just begun his first term as a Commissioner of the Advisory Neighborhood Commission (ANC) C-3, Cleveland Park.
Tom is survived by his parents, Decker Anstrom and Sherron Hiemstra Anstrom; his grandmother, Carmel Hiemstra; his aunt and uncle, Kay and Phil Singer and their children Graham Singer and Lauren Cohee (Brian, Oliver, Elliot); his uncle and aunt Michael and Barbara Hiemstra and their daughter Mariel, and his great-aunt Linda Viotti, and cousins Michelle Viotti, David Viotti (Brooke Frewing, Nate, and Paige), and Paul Viotti, Jr. He was preceded in death by his grandparents, Ronald and Ann Anstrom, by his aunt Kristina Anstrom, and by his grandfather Clifford Hiemstra.
The family would especially like to thank Dr. Steve Shapiro – who was Tom’s cardiologist from the time he was a day old until he was 30 – and Dr. Christopher Talluto and their great team from Child Cardiology Associates, as well as Dr. Joel Guiterman, Tom’s internist. They would also like to thank the many friends who so enriched Tom’s life and the life of his family.
Tom will be remembered by all for his intelligence and humor; his love of baseball, politics, and pop culture, twitter, and other social media; his passion for social justice and human and civil rights; and most of all for his kindness, love of life, generosity, gentleness, and grace.
A memorial service to celebrate Tom’s life is planned for 2 p.m. on Sunday, May 10, 2015 at the Arena Stage, 1101 Sixth Street, SW (Waterfront-SEU Green Line Metro stop).
The family will provide suggestions at a later date on charities and organizations individuals may wish to support in Tom’s honor. For additional information, please visit www.josephgawlers.com