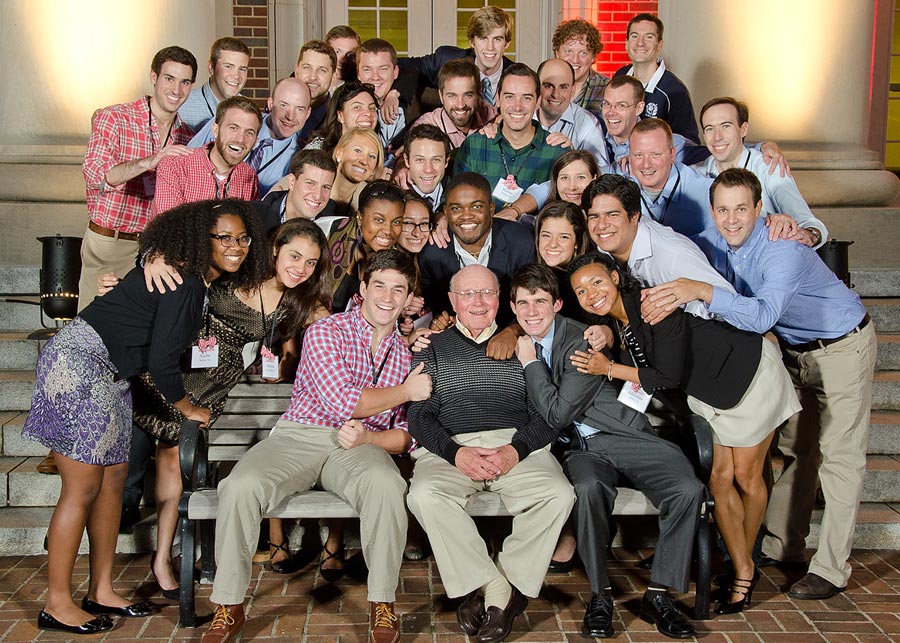 William Holt Terry was born on July 25, 1932, in Erwin, North Carolina; he died at his apartment at the Pines at Davidson on March 27, 2015. His father, William Samuel Terry, Jr., died before Will was born, and his mother, Laura Elizabeth Holt Terry, a beloved public school teacher in Durham, reared her son with courage and devotion and faith. Surrounded by loving aunts, uncles, and cousins—one of whom remembers him today as the cutest little rascal she has ever known—Will spent his boyhood on a farm in Durham County off Guess Road.

After Will graduated from Durham High School in 1950, his mother’s first dream for him came true when he matriculated at Davidson College, the place which, from his first day on campus to the end of his life, was his heart’s home.

As a Davidson student, Will was a member of Sigma Phi Epsilon social fraternity, the Eumenean Literary Society of which he was President, and Tau Kappa Alpha, national honorary forensic society. Other student activities—including membership on the honorary fraternity council and the editorial staff of the college annual—resulted in his being elected to Omicron Delta Kappa and “Who’s Who in American Colleges and Universities” during his senior year. But more important than his extracurricular activities was the fact that at Davidson, Will acquired lifelong friends, developed intellectual curiosity, honed his keen sense of humor, and found his childhood faith deepening. It was after he joined the Davidson College Presbyterian Church that Will heard and answered the call to become a minister.

After he received his B. S. degree from Davidson College in 1954, Will began graduate studies at Union Theological Seminary in Richmond, Virginia. During seminary, he spent an intern year as General Secretary of the Davidson College YMCA. The Davidson “Y” was the center of campus activities and religious life on campus, and the young Y secretary discovered his extraordinary gift for working with college students, guiding them, encouraging them, enjoying their antics, and helping them grow toward manhood.

Will returned to Union, completed his B. D. degree in 1958, and then accepted a call to Acme Presbyterian Church in Riegelwood, NC, where he served as minister for four years. He often commented on how happy those days were, how much he learned from the members of his first church, and how many close friends he made there.

But when President D. Grier Martin offered Will the chance to “come home again” to Davidson as College Chaplain, he leapt at the chance and was chaplain for four years.   After serving as Senior Minister of the Davidson College Presbyterian Church from 1966 until 1971, Will was once again lured back to his alma mater by the college president, Dr. Samuel R. Spencer, to become Dean of Students and later Vice President for Student Affairs and Dean of Students. During Will’s years as chaplain and minister of D.C.P.C., his home had been the refuge for hundreds of students who dropped by for counseling in the study or for breakfast in the dining room or for his approval of their dates on dance weekends. Why, Dr. Spencer asked Will, shouldn’t he assume the role he was born to? So he did, and as their dean, he served students as mentor, counselor, advisor, occasionally disciplinarian, and friend until his retirement in 1994. A favorite quip was that he worked in the administrations of five Davidson College presidents, and they all survived.

Will’s civic contributions included many years on the board of Planned Parenthood of Charlotte and life-long participation in the Democratic Party.

At his retirement, Will was honored by Davidson College when he received the Distinguished Alumnus Award in 1994 and had a leadership scholarship created and named in his honor—The William Holt Terry Scholarship. Will called the scholarship his most significant legacy. All who know him recognize that what he meant by legacy was not the named scholarship itself but the students who won the scholarship and, as a result, were able to come to Davidson and receive a strong liberal arts education rooted in the Reformed Tradition. And what a legacy worthy of his name it is: eighty Terry scholars and fellows who have been mentored by “D.T.,” welcomed to his house for home cooked meals, and inspired by him. The legacy continues with the countless young folks who will be “Terrys” in the future and who will go on to emulate Will’s life of service and leadership.

Predeceased by his parents and several uncles, aunts, and cousins on whom he doted, Will Terry leaves behind current and former students, former parishioners, respectful colleagues, devoted Holt and Terry cousins, loving caregivers, and literally hundreds of close friends, all grateful for his love and life. We will miss his Egg Nog parties, conversations around the dinner table, tales regaled on the porch, couples counseling before weddings, baptisms of children, Davidson reunion gatherings on the deck, Thelemite Christmas parties around the fire, tomatoes and corn from his gardens, discussions in his study after Davidson Trustee meetings, loud cheers at Wildcat games, a little gin or bourbon after a particularly challenging day at the office, Thanksgiving dinners, the Sunday School lessons and inspiring sermons, his visits to our homes, his masterful and comforting prayers at funerals, his incisive wit, sharp mind, the tears and the laughter. Simply, we will miss Will.

[note_box]On May 2, 2015, at 1 p. m, we will celebrate Will’s life and his faith during the Witness to the Resurrection service at Davidson College Presbyterian Church. A reception will follow in the Lilly Family Gallery at the college. Will would appreciate that memorials be made to the William Holt Terry Scholarship at Davidson College, Box 7173, Davidson, NC 28035.[/note_box]