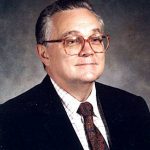 The Rev. Dr. Edward Lee Moore, retired pastor and teacher, died on December 31, 2014 in McKinney, Texas due to complications of Alzheimer’s disease. He had retired to Country Lane Senior Campus, McKinney, Texas, in 2005.

In 1962 Edward was the first person from the North Wilkesboro (North Carolina) First United Methodist Church to be ordained as a minister of the Gospel. Edward loved preaching, working with youth groups, and visiting church members, hospitals, and nursing homes. He also loved classroom teaching, and the extra-curricular activities of his students. Throughout his life, music played an important part, and he was a member of the Davidson College Men’s Chorus, the Charlotte Oratorio Singers, the Winston-Salem Oratorio Singers, and many church choirs where he lived and served. Baroque music was one of his favorites, and during his extended confinement, this music was played for him most every afternoon.

The family is deeply indebted to the caring services provided by Baybrooke Village Care & Rehabilitation Center, and McKinney Healthcare Center, McKinney, TX; the pastors and friends of First United Methodist Church, of McKinney, TX; and the pastors and friends of Wilkesboro United Methodist Church, of Wilkesboro, NC where he was a member of the Charge Conference.

Visitation will be on Tuesday, January 6th, from 9:30 until 10:30 a.m., at Reins-Sturdivant Funeral Home, 270 Armory Rd., North Wilkes-boro, NC. A graveside service will follow at 11:00 a.m. at the Moore family plot, Mount-lawn Memorial Park, in North Wilkesboro. Conducting the service will be The Rev. Chris Lakey of Wilkesboro United Methodist Church.

In lieu of flowers, memorials may be made to the Youth Program, Wilkesboro United Methodist Church, P. O. Box 197, Wilkesboro, NC 28697.