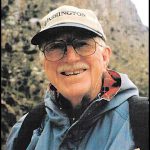 Dr. Robert Manton Wilson, Jr. died peacefully on November 19, 2014, five days after celebrating his 100th birthday. He was born the middle of seven children to Dr. Robert Manton Wilson, Sr. and Bess Knox Wilson in St. Louis, MO, while his family was on furlough from his father’s pioneering medical mission in Korea. Bob grew up in Korea, graduated from Pyongyang Foreign School, and then came to the U.S. to attend Davidson College and the Medical College of Virginia, graduating in 1943. He married Ellen Douglas Gray in Richmond, VA, in 1944.

As an Army captain and medical officer during WWII, Dr. Wilson volunteered to make a dangerous parachute jump in south China to save the life of an American officer who lay critically ill with a ruptured appendix, and then escaped by walking out through Burma. For this jump and other military service, he was awarded the Bronze Star.

Bob moved with his family to Spokane in 1959 to join Rockwood Clinic as a radiologist. He was an avid outdoorsman, and raised his children to live simply and humbly and to love and respect the natural world. The family enjoyed skiing, camping, birding, lake trips, and mountaineering. After retiring in 1983 Bob and Ellen moved to Lopez Island, returning to the Spokane area in 1998. They continued an active life in their final years, in Cheney and at Rockwood Retirement Community, walking, reading, and playing bridge.

In lieu of flowers, contributions in his memory can be made to the Nature Conservancy.