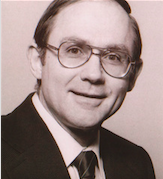 Charles was born in Johnson City, Tennessee. He was an accomplished clarinetist in high school, and drum major in the band. In Boy Scouts, he reached the level of Eagle Scout. He continued to play clarinet at Davidson College in the orchestra and gave solo concerts. He graduated from Davidson College, North Carolina, with a Bachelor of Science in mathematics in 1962, where he was the recipient of the Greek prize.

From 1967-1969, he served his first pastorate at Falling Spring Presbyterian Church, Glasgow, VA. On August 31, 1968, he married Beth, his wife of 45 years.  Charles taught high school mathematics in Richmond, VA from 1969-1970, before entering graduate school. He graduated from Union Theological Seminary, Richmond, VA, with a Ph.D. in Theology in 1974.

From 1978-2004, Charles served on the faculty of Moravian Theological Seminary , Bethlehem, PA, first as an associate, then as a full professor, where he taught Christian Theology, Christian Ethics, Greek Language, and Exegesis (critical interpretation of the Scriptures). He honorably retired in 2004.

He then served as a supply pastor at Fincastle Presbyterian Church. Learning and studying were very much a part of his life and he was a gifted teacher. He spent countless hours in libraries doing research. Charles was an avid and voracious reader. He loved languages, because he was fascinated by words and linguistics.

Through example, he taught his family the beauty of music, especially classical and choral music. Other interests included the collection of and fascination with timepieces. He got a kick out of collecting flashlights, and always had multiple ones in every room.  Most of all, he loved his family and devoted himself to providing for them.

He is survived by his wife, Beth, of 45 years; a daughter, Michele, son-in-law, David Albright; grandchildren, Christopher and Beth; and son, Mark Hargis.

One Reply to “Charles Lee Hargis ’62”