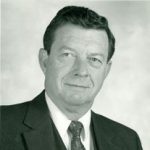 William Russell Gentry passed away as a result of complications from Parkinson’s Disease on June 3, 2014. His death occurred just prior to his 53rd Fathers’ Day, 56th Wedding Anniversary and 81st birthday.

At the end of his life he was with or in the thoughts of those he loved best.

Bill was born in Surry County, North Carolina on July 31, 1933. His family later moved to Galax, Virginia. As he moved through life and his circle of loved ones grew, he also became “Honey,” “Daddy,” and “Granddaddy.”

As a boy, he was very inquisitive, excelling in school and sports. Growing up in the mountains of southwest Virginia, he enjoyed spending time fishing and camping.

He also loved going to the “picture show” to see the adventures of Tarzan or his beloved pirate movies or westerns. The movies fueled his imagination, driving his thirst for adventure and a gift for storytelling that remained with him throughout his life.

In his high school years, he played football, basketball and baseball. As a sophomore, he earned a spot on the varsity football team where his memory of his leather helmet enlivened many a story.

In addition to attending Boys’ State, he also was a member of the debate team. After graduating from Davidson College he joined the United States Marine Corps. Bill received his recruit training at Parris Island, South Carolina, was commissioned and attended Basic School at Quantico, Virginia, in 1957.

Later in his career, the Marine Corps sent him to Syracuse University where Bill earned his MBA. His tours of duty were as exotic as the movie setting he loved as a boy. He served his country with an unwavering sense of patriotism, professionalism, and the nobility that he carried with him throughout his life.

After retiring as Lieutenant Colonel in 1976, he became a consultant. Consulting offered Bill the creative outlet he needed to develop new ideas to demonstrate the superb writing skills that earned him the nickname of “The Winner” within his company.

Always a thinker, he was a constant source of great ideas with the sole exception being his decision to buy a Ford Pinto. Bill’s family served as a welcome counterbalance to his busy professional life. He devoted his life and energy to taking care of his family and making them happy.

He was happiest grilling, engaging in conversation from his favorite chair in the sunroom with only a fire in the fireplace outshining his warm demeanor or sipping a cup of coffee and sharing The Washington Post with his beloved wife Bettie and Kitty then Chelsea and Ellie, the furry friends who always could count on him for a testy bite of bacon or shrimp. As a husband and father, he was at his best!

He enthusiastically accepted the challenges of these rolls, bringing keen insights and his own unique style and thinking to the delight of those involved. He was the quintessential family man and enjoyed nothing more than helping young hand learn to drive, fish, shoot a bow and arrow or with whatever the children were trying to achieve.

He was the warm and supportive teacher and protector whom Margaret and Bill knew as Daddy. In Later years, Granddaddy usually could be found sitting at the kitchen table planning his next project, working in the yard, entertaining on the patio or in the sunroom, or watching the rising or falling fortunes of the Washington Redskins.

He was passionate about many things, especially his family and friends and the time he spent on Hilton Head Island, South Carolina.

Throughout his life his interests changed, largely in response to his highly inquisitive mind or spurred by the changing interests of his family.

Never afraid to try something new, at various points in his life he enthusiastically threw himself into coaching youth sports, cooking, woodworking, painting, and going on adventured with Bettie.

Bill was an active participant in life. He was fully engaged in the lives of those around him. He was a good friend to the hundreds of people he connected with throughout his life. Gracious and generous, he was a man of many talents. He is truly loved and will always be missed!

A life celebration service will be held at Marine Base Chapel, Quantico VA on Thursday, June 12, 2014 at 1:00pm. Interment will follow at Quantico National Cemetery.