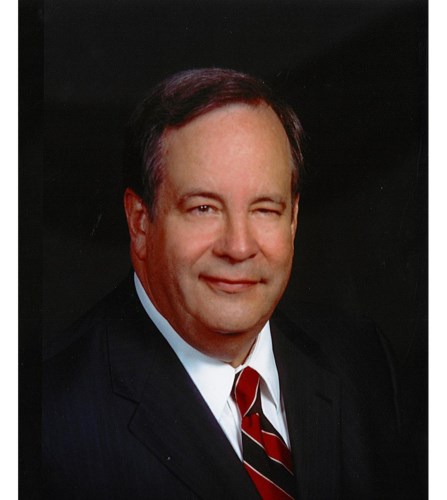 The Honorable William Erwin Spainhour died September 26, 2020, from complications of a traumatic brain injury, surrounded by his family’s love. To his last days, Erwin lived a vigorous life of faith, integrity, intellectual curiosity, service, and compassion. He was a patriot and devoted son, husband, father, grandfather, and friend.

Erwin was born in Lenoir, North Carolina, to Richard Edward and Mildred Erwin Spainhour, who predeceased him, and reared in Erwin, Tennessee, an area settled by his ancestors prior to statehood. The beauty of the surrounding mountains, rivers, and creeks instilled in him a lifelong love of the outdoors.

Erwin graduated in 1964 from Davidson College, where he studied Economics and was President of Pi Kappa Phi fraternity. Upon graduation, he was commissioned as a 2nd Lieutenant in the U.S. Army and completed his first year of law school at the University of North Carolina. Due to the escalation of the conflict in Vietnam, he began active duty in 1965 and was stationed primarily at the Pentagon, attaining the rank of Captain.

In 1968, Erwin returned to Chapel Hill with Jane, and he graduated from the University of North Carolina School of Law in 1970. Erwin and Jane then moved to Concord, North Carolina, where he joined the Hartsell, Hartsell & Mills law firm. In 27 years of private practice, Erwin represented varied clients-those ranging from indigent accused persons to large corporate interests-with equal zeal. Erwin particularly excelled as a litigator and relished every opportunity to try a case. In 1997, Governor James B. Hunt appointed Erwin to the Superior Court of North Carolina, and Erwin served as Senior Resident Superior Court Judge for Judicial District 19A until retiring in 2014. Prior to retirement, Erwin served on several three judge panels, including a panel of the State’s Innocence Inquiry Commission that determined two individuals were wrongfully convicted of serious crimes they did not commit. The panel exonerated them and set them free. The Governor granted Erwin the honor of The Order of the Long Leaf Pine for his 17 years of public service as a Judge.

In his life and work, Erwin adhered to the tenets of Micah 6:8 and Matthew 25, revered the Constitution and its aims for a more perfect union, and studied history voraciously and carefully. He was a proud descendant of Pilgrim, Scots-Irish, Swiss Reformed, and Huguenot immigrant ancestors who in difficulty settled wildernesses and formed families.

Due to the coronavirus pandemic, a private graveside service at the family cemetery in Erwin, Tennessee, will be followed by a memorial service and celebration of Erwin’s life at First Presbyterian Church, Concord, in 2021 (date to be determined).