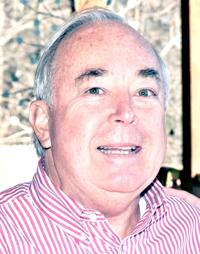 Edward Lasater Irvin passed away peacefully on October 6, 2018, at Batangas Gardens care facility at Bermuda Village after a valiant struggle with cancer.

Ed was born on November 29, 1935, in Winston-Salem, the second son of George Lee Irvin Jr. and Virginia Lasater Irvin.

He attended Summit School and Wiley School in Winston-Salem before graduating from Woodberry Forest School in Orange, Virginia.

He spent four happy years at Davidson College where he was a member of Beta Theta Pi fraternity. There he formed life-long friendships, played soccer and graduated in 1958.

After graduation, Ed served two years in the Military Intelligence Corps of the US Army. He obtained an MBA from UNC-Chapel Hill and returned to Winston-Salem to join Integon Corporation, where he worked for 20 years. He then began a second career as a stockbroker, retiring from Wells Fargo Securities in December 2016.

Ed was a loving husband, father, grandfather, and friend.

Always gregarious and energetic, he loved dancing, tennis, golf and lively conversations about politics, world affairs, and sports, but none as much as his beloved family.

Ed never met a stranger and loved engaging people of all walks of life with curiosity, kindness, and humor. He was devoted to his four-legged constant companion, Boo.

Ed was preceded in death by his parents and former wife Nancy Dotterer Irvin.

Ed was a lifelong member of St. Paul’s Episcopal Church. He served on several community boards including the Prodigal Community, the Salvation Army, the Boys and Girls Clubs and the United Way of Forsyth Country. He was a long time member of Downtown Rotary and Roaring Gap Club.

During his illness, Ed received caring and excellent support from Dr. Glenn Lesser and his team at the Comprehensive Cancer Center, Dr. Jeff Williamson and his colleagues at the Sticht Center, the staff at Batangas Garden and Trellis.

A celebration of Ed’s life will be held at St. Paul’s Episcopal Church, 520 Summit Street, Winston-Salem, NC 27101 at 2 PM on Wednesday, October 10th.

Online condolences may be sent to www.salemfh.com.