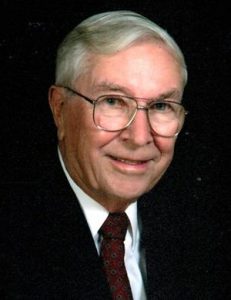 Ordained in 1950 as a Presbyterian minister, he served pastorates in Grover and Gastonia, N.C., Jackson and Meridian, Miss., and as an associate pastor at Second Presbyterian Church in Little Rock, Ark., from 1983 until retirement in 1990.

He and Betty Jean Combs married in Nicholasville, Ky., and had almost 69 years together. She survives along with children Rodney (Terry) Moore of Reedsport, Ore., Janie Rash and Aileen Moore of Little Rock, Ark., and grandchildren Michael Vitela and Lucy Vitela of Little Rock, and Jonathan Moore of New York City, N.Y.

Rev. Moore has a surviving sister, Elizabeth Cameron, of Storrs, Conn., a niece, and two nephews. He was preceded in death by his sister, Louise Shirreffs, of Conyers, Ga.

During World War II, Rev. Moore served on a US Navy destroyer in the Pacific and later as a USNR Chaplain.

In lieu of flowers, memorials may be made to Second Presbyterian Church, 600 Pleasant Valley Dr., Little Rock, Ark., 72227, or a charity of your choice.

Arrangements are under the direction of Ruebel Funeral Home, www.ruebelfuneralhome.com.