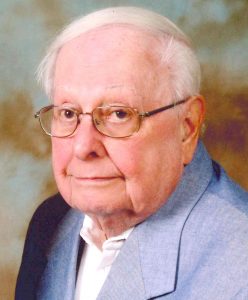 He was born January 13, 1926 to Andrew Franklin Kilby and Grace Lomax Kilby. Mr. Kilby was predeceased by his wife of 69 years, Betty Summers Kilby, and his sister, Grace Frank Mayberry.

Mr. Kilby was President of Yadkin Valley Motor Company, North Carolina’s oldest Ford dealership established in 1915. He worked there six days a week, arriving by 6:30 AM, until 6 days before his death.

He attended Davidson College prior to his voluntary enlistment in the US Army Air Force on December 7, 1943.

He proudly served as a bottom-turret and waist gunner on a B24 Liberator bomber during World War II in the 2nd Bomb Squadron of the 22nd Bomb Group of the 5th Air Force. The majority of B24s were made at Ford Motor Company’s Willow Run Plant.

When the war ended, Mr. Kilby served as part of the US occupation force in Japan. After leaving the military service, Mr. Kilby attended college in Bowling Green, Kentucky.

A graveside service with Military Honors by Veterans of Foreign Wars Post 1142 will be held at Mountlawn Memorial Park, 10:00 AM Friday, July 20, 2018, with Dr. Bert Young and Rev. Steve Snipes officiating. Following the graveside service, a reception will be held in the Wayland Hall of First Baptist Church in North Wilkesboro at 11:00 AM.

Online condolences may be made at www.reinssturdivant.com.