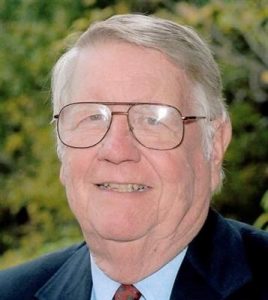 Seddon “Rusty” Goode, Jr., 86, died peacefully and surrounded by family on May 14, 2018. He was predeceased by his loving wife of 56 years, Jane Nisbet Goode.

Rusty was born on January 7, 1932 in Clinton, North Carolina to the late Seddon Goode, Sr. and Hallie Ross Goode. Rusty was raised in Lakeland, Florida and graduated from Lakeland High School in 1950 and Davidson College in 1954. After serving two years as an officer in the U.S. Army, he earned an MBA from the University of North Carolina at Chapel Hill in 1957.

Rusty began his business career in 1957 in Charlotte with Southeastern Financial Corp. He later held executive positions with North Carolina National Bank and Interstate Securities Corp., working for his father-in-law, Walter Olin “Mutt” Nisbet. In 1981, Rusty became President and Director of the University Research Park. Upon his retirement in 2006, he became Vice Chairman.

Rusty loved helping and connecting people and serving the City of Charlotte and the State of North Carolina. From 1979 to 1989, Rusty served on the board of the NC Department of Transportation, including a term as vice chairman. Rusty’s terms spanned both Republican and Democratic administrations, and he became affectionately known as the “Road Czar”. Rusty was one of the architects of Interstate 485 for which a section was named in his honor in 1997.

In 1992, he was honored by the Governor of North Carolina by being awarded The Order of the Long Leaf Pine. Rusty spent 21 years on the Board of Commissioners of the Carolinas HealthCare System and 20 years on the Board of Trustees of Davidson College. In addition, he served on the boards of Canal Industries, Inc., the NC Global TransPark Authority, The NC State Ports Authority, The NC Advisory Budget Commission, the Charlotte Chamber of Commerce, the State Teachers Retirement System and the UNC Charlotte Foundation. UNC Charlotte awarded him an honorary Doctor of Public Service degree in 2007.

While Rusty spent a lot of time working, he always managed to find ways to do the things he loved most: sharing time with Jane, especially watching their kids and grandkids play sports; cheering on the Wildcats; puttering in his tool sheds in Montreat and Wrightsville Beach; rebuilding a Boston Whaler in his driveway; ordering from catalogues; fishing in the Florida Keys and Wrightsville Beach or driving through the farm or the URP just to “check on things” and to catch up with those who went along for the ride.

Rusty is survived by his daughters, Beth Goode Reigel (Ernie) and Mary Jane Goode (Walt Gramley). In addition to his wife, Jane, Rusty was preceded in death by his son, Ed Goode, and is also survived by his daughter-in-law, Beth Goode (Carl Belk). Also surviving are his seven grandchildren who lovingly called him Papoo or Pop: Rebecca Jane Ponton (Rob), Will Reigel, Rusty Reigel, Mary Ellen Goode (Matt Spangler), Eddie Goode, Elizabeth Gramley and Ross Gramley and three great-grandchildren, Ellie, Jane and Robbie Ponton. Additionally, Rusty is survived by his sisters-in-law, Becky Rencher and Marian Nisbet and was preceded in death by his brothers-in-law, Olin Nisbet and Bud Rencher. Many cousins, nieces, nephews and grand-nieces and nephews also survive Rusty.

The family would like to thank Lametsha “Buffy” Crawford for the invaluable love, support and care she has provided over the years to Rusty, Jane and “Gagi”. You will forever be a part of our family. Thank you also to Southminster Healthcare and Hospice and Palliative Care of Charlotte for your care, compassion and support.

A memorial service will be held on Thursday, May 17, 2018 at 11 o’clock in the morning at Covenant Presbyterian Church. The interment will be private. The family will receive friends immediately following the service in the Fellowship Hall.