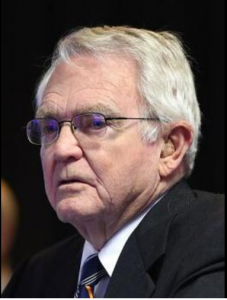 Harry was a life-long resident of Fayetteville. He attended Fayetteville Public Schools. Harry served with the US Navy in the Pacific Theater during WWII.

After graduating from Davidson College in 1950 he worked for Superior Stone Company in Lillington, North Carolina.

In 1960 the Shaws returned to Fayetteville when he took a position with Home Federal Savings and Loan Association where he remained for 32 years. After retirement, he became a partner in Gaines and Shaw Appraisers. He was president of both the McLean Foundation and the McLean Development Corporation.

In 1975 he was appointed by the governor to the board of FTCC and then was appointed as a member of the State Board of Community Colleges’ Commission on the Future.

In 2005, FTCC dedicated the Harry F. Shaw Virtual College Center to honor his 29 years of serving as the Chairman of the FTCC Board. In 2015 he received the I.E. Reedy Award from the State Board of Community Colleges.

Harry’s integrity and energy is the great legacy he leaves behind. His civic and philanthropic pursuits will be missed not only by his family but an entire community.

Harry was predeceased by Sarah Stewart, his wife of 58 years and his son Paul Stewart Shaw.

The family will receive friends Tuesday, May 22, 2018 from 5 to 7 p.m. at the First Presbyterian Church Eller Hall.

A Memorial Service will be held at 11 a.m. on Wednesday, May 23, 2018 at the church with Dr. Mike Garrett and Rev. Donna Marchant officiating. The family will receive friends following the service in Eller Hall.

In lieu of flowers, donations may be made to the Cross Creek Linear Park Foundation.

Published in Fayetteville Observer on May 21, 2018