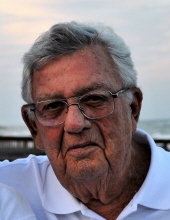 William Littleberry Vinson, “Fritz”, 91, died Wednesday, March 28, 2018 in Pawleys Island, SC. Fritz was born on January 9, 1927 in Greensboro, NC to Barnard Bee Vinson and Helen Julian Vinson. He was the youngest of four sons, and was preceded in death by his parents and brothers; Barnard Bee, Charles Julian, and Paul Garrett.

Fritz was a life-long learner. Invited along with his mother to accompany his brother Charles during his US Navy pilot training, Fritz attended five different high schools in Florida and Texas, ultimately graduating from Miami High School in 1944. He studied political science at Davidson College and graduated in 1948. He completed his law degree at Emory University in 1952 and was a member of the Georgia Bar since 1951. Throughout his life, Fritz was a well-regarded business man.

After graduating from college, Fritz joined the credit department at Sears, Roebuck & Co. in Atlanta, Georgia. He moved into management of the tax department at Sears after completing law school and remained there until founding his own property tax consulting business, Cape and Vinson, with his friend Forrest Cape. Fritz continued to be a well-respected property tax consultant in Atlanta until he retired as president of Avtax, Atlanta in 1998 and moved to Pawleys Island, South Carolina in 1999.

Soon after arriving in Pawleys Island, Fritz studied to become a Master Gardener and volunteered at Brookgreen Garden and with the Clemson Extension Service on their water sampling team. Fritz was never comfortable being retired and was glad to be able to continue working as the Financial Director and Treasurer at Georgetown Presbyterian Church right up until his death. Fritz deeply valued the friendships he enjoyed with his co-workers.

Fritz was a loving husband and father. It was friends, Nancy and Kent Beals, who introduced Fritz to two of his greatest loves, Pawleys Island and Luan Butler, the beautiful woman who would become his wife and best friend. Fritz proposed to Luan two weeks after their first blind date.

He often said that one of the best things about Luan was her beautiful daughters, Nancy and Kathy. When Luan and Fritz married on October 3, 1964, he became not only husband to Luan but daddy to these two little girls. Over the next sixteen years, two more girls, Caroline and Anna, joined the family. He was so proud of all his daughters, their spouses and his grandchildren.

Fritz’s generous love embraced and supported not only his wife and children, but many extended family members, friends, colleagues, and members of the wider community.

When their own nest emptied, Fritz and Luan adopted a residential cottage at Thornwell Home for Children in Clinton, South Carolina, providing for the needs of the cottage including hosting the children and their house parents for vacation time at the beach and in the mountains. Together, Fritz and Luan served on the Board of Visitors for Thornwell Home, and established a family legacy fund for cottage life.

A service of Witness to the Resurrection and Celebration of Life will be held at Georgetown Presbyterian Church, 558 Black River Road Georgetown, SC 29440 at 11:00 am on Wednesday, April 4, with a reception to follow. You may sign a guest book at www.mayerfuneralhome.com.

Memorial gifts may be made to the Vinson Family Legacy Fund for Cottage Life at Thornwell Home for Children, 302 South Broad Street, Clinton, SC 29325, or to Georgetown Presbyterian Church.