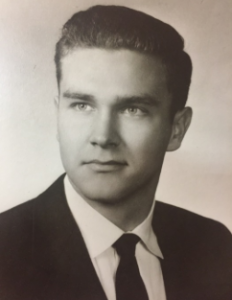 It was always his dream to be a pilot and immediately after college gained a spot in officer training at the Naval Air Station Pensacola’s flight school. Bob served with his fighter squadron on the U.S.S. Coral Sea during the Vietnam war.  After a decade in the Navy and becoming a pilot he went to work for Trans World Airlines. Bob retired from TWA after three decades with the airline.

Bob married his high school sweetheart, Beverly Billings and together they raised four children, Robert, Michael, David and Elizabeth. Robert was preceded in death by his parents, his son Michael, his sister Martha Ann Bull and his wife Beverly who passed away in 2005.

Bob is survived by his wife, Donna, of the home, whom he married in 2010, his sons, Robert III (Janet) and David (Patty) and his daughter Elizabeth (Reagan) Rayburn. He also leaves behind three grandchildren, Emily, Sammy and Allison.

Robert is also survived by and will be sadly missed by his step children, step grandchildren and great-grandchildren.

Memorial donations in memory of Bob can be made to the Parkinson’s Foundation, Lewy Body Foundation or Catholic Community Hospice of Olathe.