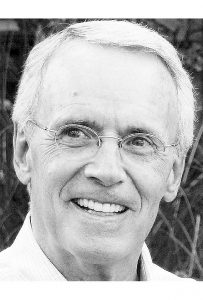 A memorial service will be held at 11 a.m. on Saturday, February 24 at First Presbyterian Church of Greensboro. The family will receive friends in the Virginia Gilmer room following the service.

George was born July 12, 1941 in Charlotte, North Carolina. He graduated from Myers Park High School in 1960 and Davidson College in 1964. He worked in textile sales for Guilford Mills, followed by positions at Carolina American and Macfield Texturing. Eventually George started his own business, Harris Management.

Over his lifetime, George nurtured a passionate interest in outdoor activities. He was happiest when he was skiing, kayaking, cycling, or backpacking, and one of his favorite places in the world was Alta, UT. George heli-skied in British Columbia and kayaked the Colorado River through the entire Grand Canyon.

The natural world was George’s heaven and he marveled in all its beauty. George was most at home in the outdoors, and he realized how important it is to protect our fragile environment.

He was an ardent supporter of environmental causes and gave generously to the Sierra Club, the Natural Resources Defense Fund, and the Nature Conservancy. The Southern Environmental Law Center is the group that he was most passionate about.

George loved his family, especially his seven grandchildren, who called him Poppi.

He is survived by his wife Berkeley; his sister Marie Grauerholz of Durham NC; and his three children, Virginia Knox and her husband David of Seattle, WA, Parker Harris and his wife Holly of San Francisco, CA and Berkeley Gardner and her husband Ed of Charlotte, NC.

He is also survived by his seven precious grandchildren, Olivia and Henry Knox, Zoe, Benjamin, and Nicholas Harris, and Berkeley and Luke Gardner.

In lieu of flowers, memorial contributions may be made to the Southern Environmental Law Center, 201 West Main St., Suite 14, Charlottesville, VA 22902 or to Hospice and Palliative Care of Greensboro, 2500 Summit Avenue, Greensboro, North Carolina, 27405.

Poppi would probably also want you to go to a local outdoor store and get yourself a new pair of hiking boots. Get outside. Hanes Lineberry North Elm Chapel is serving the Harris family. Online condolences may be made to www.haneslineberryfuneralhomes.com.