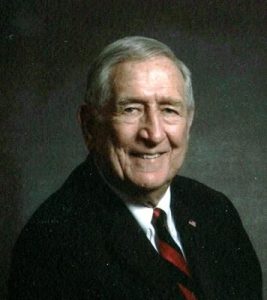 Jake was born in Greensboro, North Carolina, May 30, 1928 to the late Julius Jennings “Jake” Wade and Mary Hamlin Landis Wade. Jake was a lifelong Charlotte resident.

He received the prestigious faculty medal for General Excellence at Darlington School and was elected to the Davidson College Student Council and Omicron Delta Kappa, a national collegiate leadership society. He was a member of the Kappa Sigma fraternity.

Jake was a true competitor and leader on the sports field. He was captain of his junior and senior high school and baseball teams and a member of the Central High School Varsity State Champion football team. At Davidson College, he was a four-year monogram letterman in football and baseball and made a quite a splash with his 95-yard interception return for touchdown that allowed Davidson College to defeat N.C. State in football. He was voted into the Davidson Athletics Hall of Fame in 2000.

After graduating from Davidson College, Jake served as an active duty commissioned officer in the United States Army during the Korean War. He then graduated from the University of North Carolina School of Law at Chapel Hill and began his lengthy law practice in Charlotte. He was a member of Christ Episcopal Church and Charlotte County Club.

Jake was loved by hundreds of young ballplayers taking their cuts at the plate. “Got the right man up,” he was known to chatter and “get it next time,” if they struck out. For his years of service in youth sports, he was named the 1987 Sportsman of the year by the Charlotte Sporstman’s Club and awarded the 2010 Legacy of Coaching Award by the Mecklenburg County YMCA.

He coached the Harry and Bryant baseball team in Myers Park Trinity Little League for some sixty years and Jake Wade Field is named in his honor. The bronze plaque at the field is a reminder of his “positive influence,” his “contagious enthusiasm,” and his “optimistic attitude.” Jake will be fondly remembered as an athlete by desire, a gentleman by nature, and a friend to all.

Memorials may be made to the Autism Society, Davidson Athletic Foundation or Myers Park Trinity Little League. 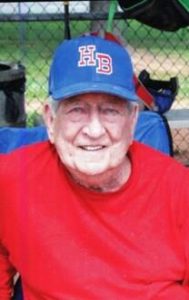