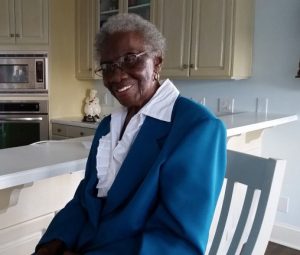 Lula Bell Houston, one of the matriarchs of ​the historic ​Smithville​ community​ in Cornelius and a beloved presence for 60 years at Davidson College, passed away in her sleep at ​age ​94​ today​.

Born in 1923, she worked in the laundry at Davidson College where the new student resource center and the building itself is named after her. She’s known as “Mama Lu” to thousands of young people who attended Davidson during the six decades that she worked there.

​She took the $12 a week job at Davidson after her first husband left the 25-year-old single mother of two. ​Some times, when her children were small, they came to work with her. She would later remarry and add two more children to her family, and she continued to work at the laundry​.​

​The new resource center at Davidson College—simply called Lula Bell’s—was dedicated one month ago. Mama Lu had dinner that night in the president’s mansion with her family.

Lula Bell’s provides students with professional and winter clothing, textbooks, food and kitchen supplies. Along with resources for all students, the space will host innovative and informative programming around systemic social issues and life skills, such as financial literacy.

When Mama Lu retired, US Rep. John M. Spratt Jr., a Davidson alum, prepared a congratulatory statement for the Congressional Record. It was read on the floor of the US House of Representatives.

She was also a ​gifted ​vocalist​, and sang with the Gethsame Gospel Singers, ​based at Gethsemane Baptist Church in Davidson​ for many years​. She received the Sojourner Truth Award from the National Association of Negro Business & Professional Womens Club in 2012 and Business Today’s Lifetime Achievement Award in 2015.

​She is survived by her four children, Peggy Rivens, William Edward Miller, Clarence Miller and Loria Houston, as well as grandchildren and great granchildren and nieces and nephews and a host of friends, including a special friend, Bill Williams.

Funeral arrangements are under the care of W.H. Bryant A.E Grier & Sons Funeral Home in Mooresville.

Learn more about how Lula Bell’s legacy lives on at Davidson: