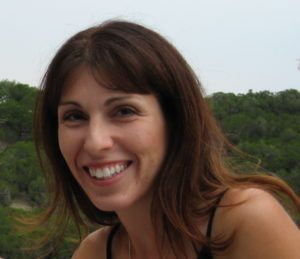 Jennifer loved to be outside.  She loved the sunshine more than anyone else.  She was the only person who would say, “Thankfully, it’s going to be 94 degrees tomorrow!”

She loved fireworks; when she heard them going off she would grab a kid and run around town together until they could see them.

Jen loved mashed potatoes.  She loved cheese. She loved laughing.  She loved driving a stick shift with the top down. She loved dancing in the kitchen to whatever her girls put on the radio. She was incredibly generous and gracious.  Jen loved her family above all else.

Jen was born Jennifer Lynn Hoffman on March 6, 1968, in East Lansing, Mich., to Judith Lee Stangel Hoffman and Alan John Hoffman.  Jen grew up in Tucker, Ga., and graduated from Shamrock High School in Decatur in 1986. She served as the school’s Miss Shamrock her junior year.  Jen studied political science at Davidson College in Davidson, N.C., and served as editor of its student newspaper, The Davidsonian. She graduated in 1990.

Jen was a journalist. She began her professional career as a college intern at The Chronicle of Philanthropy. She joined the newspaper full-time as a staff writer the summer immediately after she graduated from college. She launched many of the then-new newspaper’s now-signature reports, including The Philanthropy 400 and its annual survey of charitable-organization salaries.

Jen was a gifted writer and editor, and eventually earned the role as The Chronicle’s managing editor. She was known for having a deft touch with profiles and how-to stories, and had a great ‘bedside manner’ with her reporters.

Her longtime friend and editor, Stacy Palmer, writes that Jen “always knew just how to tell a reporter what a story needed to be stronger and supported the journalists at COP with intelligence and compassion all the way through the editing process.” Jen later worked for Amtrak in Washington, D.C., and BLH Technologies, Inc., in Rockville, Md.

Jennifer Lynn Hoffman married Thomas Hampson Moore ’90 in Two Rivers, Wis., on June 23, 1990, as her grandparents Helen and Hugo Hoffman celebrated their 50th wedding anniversary. Though they divorced in 2011, their marriage produced three amazing children: Katherine Violet Moore, born 1997; Joseph Hugo Moore, born 2000; and Eleanor Rose Moore, born 2002.  They were truly the loves of Jen’s life and she could not have been more proud of their many accomplishments.

Jen died October 14, 2017, at Suburban Hospital in Bethesda, Md., as the result of a long illness. The last of Jen’s many gifts to the world was her donation of her organs and tissues.

Among those left to mourn Jen are her children, Katie, Joey and Ellie, of Rockville, Md.; her sisters, Laura Jane Cohen, of Burke, Va., Brenda Crellen, of Lady Lake, Fla., and Allison Sutton, of Norcross, Ga.; her father and stepmother, Alan and Nancy Hoffman, of Dumfries, Va.; her mother and stepfather, Judith and Ken Crellen, of Lawrencevillle, Ga.; two nieces (and one on the way); three nephews; countless in-laws and cousins (particularly on the Hoffman side); and many devoted friends and colleagues.