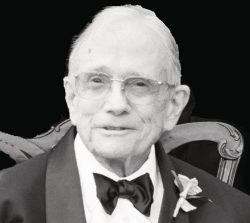 Alvis McDonald Baucom, called “Don” by the many who knew him, was born on March 5, 1931, to Charles Franklin Baucom Sr. and Zylpha Caroline Pollard Baucom of Farmville.

Though he was afflicted by illness as a boy, Don’s resolute but warmhearted family succeeded in giving him one of life’s great privileges: a happy childhood in a loving home.

Don grew to be a charming and handsome man with a generous spirit and a strong will to live life to the fullest. Blessed with a thoughtful but clever mind, Don received his A.B. at Davidson College. There he obtained a rich education but also developed a feverish case of wanderlust. He never recovered.

Don’s interests and his work — which he blended seamlessly throughout his life — first led him to New York, Saigon and Tokyo, where he pursued a career in shipping while learning to sail. Don’s course through Asia ultimately landed him in 1960s, go-go Hong Kong, where he built an international antiques business and spent 30 blissful years.

Eventually, even Don felt the pull of home. After several years in Charleston, he realized a boyhood dream by acquiring the Edwards Dawson Home in Snow Hill. He took great pride in the house, which was built by his aunt and uncle in 1901 and which he lovingly restored.

Never one to act his age, Don eschewed retirement, traveled and spent time with his beloved son, and delighted in engaging his many neighbors and friends in lively conversation. On Friday, October 20, 2017, he died peacefully in the home and community he treasured.

Don is survived by his son, Ben Baucom, and wife Leah, upon whom Don looked as a daughter. Others who survive and cherished him include Noel Lang Baucom, Michael Baucom, Joyce Baucom Jones and Kearney Long, all of Farmville; Steve Mizell of Pactolus; and Bailey Suggs of Snow Hill.

Funeral services will be held on Wednesday, Oct. 25 at 4 p.m. at the historic St. Barnabas Cemetery, located at 111 SE Fourth Street in Snow Hill. A reception will follow, where friends are invited to gather and celebrate his long, rich and well-lived life.

In lieu of flowers, memorials may be directed to the Snow Hill Presbyterian Church, c/o Bobby Glossip, 201 Hines Street, Snow Hill, NC 28580, or to the charity of one’s choice. Online condolences may be expressed at www.taylor-tyson.com.