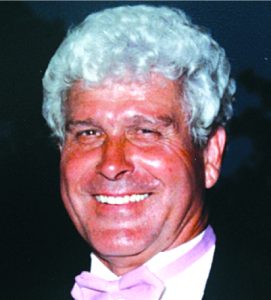 Little Howard, 81, passed away unexpectedly on July 3, 2017. He was preceded in death by his parents, Jack and Louise Mundy, a brother Jackie, and an aunt who became his surrogate mom, Gladys Seehorn.

Little moved in with his aunt Gladys, attending Lenoir High School, where he became a football star. He met his first wife, Beverly Wilson there, and after college graduation, they were married.

Little was recruited by several colleges that offered him scholarships for both his academic and football skills. He chose Davidson College, where he joined Phi Delta Theta fraternity. He graduated with honors and a BS degree in Economics.

Prior to graduation Little contracted polio in his upper thigh. As a result, he had to graduate a year later due to the length of his treatment. He was asked to play in the Shrine Bowl, and when he walked out on the field, he received a standing ovation from the stadium crowd!

Little was offered a job in sales with Standard Oil Company, so he moved to Charlotte, where he remained for more than 50 years.<

A year later, he received orders from the U.S Army to report to Kaiserschoten, Germany for duty. He became a sergeant, and had the opportunity to travel throughout Europe while enlisted there. In the early 60's, he returned to Charlotte and entered the real estate industry. He got his real estate sales and building contractor's licenses.

His roommate and frat brother, "Bun" Perkinson and he established Howard-Perkinson Realty. They built apartments and some spec homes in southeast Charlotte. Another Davidson graduate, James "Slick" Evans, asked Little to form a construction company with him, and together they built both McClintock Woods and Carmel Woods in the late 60's and 70's.

When the interest rates climbed to 22% for builders, Little was asked to consult for the Lake Norman Company. In the mid-80's, Jim Evans asked Little to come back and work with him as V.P. of Construction, building luxury townhomes. Evans had started the construction of SharonView Place townhomes. Kym was the on-site salesperson for the Allen Tate Company, who represented Evans. They spotted one another, and the lovely courtship began.

Little helped build five successful townhome communities until he retired in 2001. Little became an enthusiastic tennis player through his membership at Olde Providence Racquet Club. He enjoyed sitting out on the front lawn porch telling jokes to his cronies.

He loved to dance to beach music doing what became known as the "disco shag". He never missed a party at OP or at Providence Country Club, where he was also a member. Little loved reading, trips to the beaches, mountains, or Shelton Vineyards, all spectator sports, and relaxing by his pool.

Little has been described as a "beautiful man both inside and out". He was a "gentle giant". He was kind, loyal, honest and humble… a true gentleman. He had a mighty spirit that kept him going through the adversity he faced, as a result of the neck fractures. He kept "plugging" along, walking a mile every day, cane in hand. He has left a huge void in all of our lives.

Published in Charlotte Observer on July 17, 2017