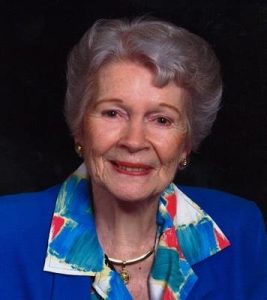 Elizabeth Averill Harkey (“Lib”) passed away on Tuesday, June 6, 2017. Lib was born in Raleigh on September 21, 1919 as the only child of Louise Currie Averill and Frederick Leland Averill. She was a graduate of Peace College and Duke University.

She attended the University of North Carolina School of Social Work at Chapel Hill. Peace College awarded her an Honorary Alumni Award in 1973, the William Peace Medallion in 2007 and an Honorary Doctorate of Humanities in 2011.

Lib endowed a scholarship at Peace College. In 2014, the University of North Carolina School of Social Work recognized her for a Lifetime of Outstanding Social Work, Practice and Achievement.

While attending UNC, she met Henry Lee Harkey, a Davidson College graduate and a UNC Law School student who was a commissioned officer in the US Army. They married on December 13, 1941, just six days after the attack on Pearl Harbor. Henry Lee had orders to report for active duty immediately following their wedding. During the reception, Lib convinced her new husband’s commanding officer to allow them a brief honeymoon. Lib could be most persuasive.

She is also survived by many wonderful friends who carry on Lib’s legacy of fulfilling her faithful commitment to the giving and providing of service to others.

Lib moved to Charlotte in 1947. She was employed as a Case Work Supervisor with the Department of Social Services and in the same year served as the Co-Chair of the Charlotte-based White House Conference Committee for Child Welfare.

She has served as the State Director of the NC Junior Women’s Clubs, a Cub Scout Den Mother, President of the Eastover Elementary PTA, President of the Mecklenburg County Legal Auxiliary, President of the Shepherd’s Center of Charlotte, Chairman of the Board of Sharon Towers and a Board of Directors member of Habitat for Humanity and the Presbyterian Samaritan Counseling Center. Lib and longtime friend Sarah Bryant were the co-founding members of Planned Parenthood of Greater Charlotte.

She served several terms on the Board of Directors of the YWCA of Central Carolinas and as President of the YWCA from 1977-1979. She was honored with the YWCA Woman of Achievement Award in 2006.

She served on the Board of Visitors of Davidson College and the Church Relation Council of Warren Wilson College, where an honorary scholarship has been endowed in her honor.

Lib and Henry joined Myers Park Presbyterian Church in 1947. She served her beloved church as President of the Women of the Church, Superintendent of the Primary Department, co-founder of the Peacemaking Council and as Co-Chair of the Linking God’s Children Campaign with the late Bill Lee. Lib and her dear friend Danny Verner were the first women elected as Ruling Elders.

Lib served the Mecklenburg (now Charlotte) Presbytery on the Haiti Development Commission, the New Church Development Committee and the Nominating Committee. She has served the National PCUSA and its predecessor on the Board of Women’s Work, The Synod of NC, the Task Force on World Hunger, the General Assembly Mission Board and the General Executive Board.

Lib loved her grandchildren Jon, Chris and Lauren. They affectionately called her “HiMommy.” Lib provided them with an enviable model of how to live with an open mind and love with an open heart. She adored her “daughters” Johanna and Catherine and would do everything she could to share her special love with her great granddaughter, Brooke.

Lib never met a stranger. It made no difference if you were a bank president, a young pregnant woman in need of a home or a Haitian refugee. She respected everyone and never saw differences, only commonalities. Lib believed that all people have gifts that could be shared. It was her gift to be able to nurture those relationships, just like she tended to her roses, which allowed her to lovingly share them with others.

Lib recently stated, “in today’s world I see the value of relationships diminishing and that really concerns me, we take so much for granted – including each other, and that is one of the worst things we can do. Each one of us is responsible for nurturing our relationships with our neighbors, our families and friends. The opportunity to serve humanity has led me to a better understanding of the value and purpose of life…”

Her family would like to express its sincere appreciation for the loving care provided by the staff of Sharon Towers, and also to Lin Watkins for the loving companionship provided in Lib’s later years.

A service to “Celebrate the Life of Lib Harkey” will be held at Myers Park Presbyterian Church on Friday, June 9, 2017 at 2:00 p.m. with the Rev. Dr. Joseph J. Clifford officiating. A reception “for the nurturing of relationships” will be held immediately following the service in Oxford Hall. Interment will be private.

The family would like to ask anyone wishing to share a gift or memorial to do so with the Myers Park Presbyterian Church Endowment Fund or the charity of your choice .

Published in Charlotte Observer on June 7, 2017