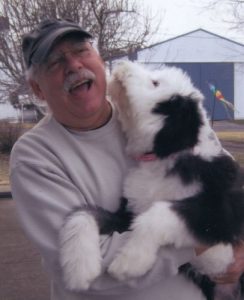 James Richard Gaul, 72, of Tipton, peacefully left this life on Wednesday, June 7, 2017, at home with family by his side.

Jim was born on February 18, 1945 in Iowa City, Iowa to Ralph and Martha (Buchanan) Gaul. He was the senior class president and graduated from Tipton High School with the class of 1963. He played football at Davidson College, where he cultivated his love for music, art and books. He proudly served in the U.S. Marine Corps from 1966-1969, before completing his studies at the University of Iowa.

Jim married Karla Jeanne Boyles in Iowa City on August 17, 1974, and quickly learned how to get the last word in (“Yes, dear”). They returned to his childhood home in rural Tipton where they raised their three children: Katherine (Katie), Anthony (Tony) and Elisabeth (Ellie). To this day, Katie, Tony and Ellie follow the Three Prime Directives of a Kid that Jim created: “1. Don’t grow up too fast; 2. Kids are made to have fun; 3. Take care of your parents in their old age.”

Jim took over the family farm upon the death of his father in 1975, farming for the next 20 years and teaching a class on Forage Grasses for several semesters. He then became a corrections officer at the Iowa Medical and Classification Center and retired after 21 years. A man of eclectic, yet understated interests, Jim enjoyed books and taught his children how to read with McGuffey’s Readers. He loved collecting books from used book stores (especially cookbooks), listening to jazz and a variety of other genres, searching for new recipes and cooking, traveling with Karla and spending time with his faithful, four-legged companions, Sasha and Sophie.

For many years, he played softball on the Red Pin Lounge’s men’s softball team, and enjoyed the aftergame refreshments nearly as much as the game. He served on the board of the Friends of the Library in Tipton for several years, and was often caught buying back cookbooks that he had donated to the Library’s book sales. He was a member of Sigma Phi Epsilon Fraternity, the International Association of Turtles and the First United Church of Christ in Tipton.

He loved well and was well loved, all the while abiding by the expression, “I may grow older, but I’ll never grow up.” A favorite of the Mercy Medical Oncology nurses, he accepted his pancreatic cancer diagnosis and treatment with grace and humor. As he was wont to say in his final months, “Death smiles at everyone, Marines smile back.”

Jim is survived by his wife, Karla Gaul of Tipton; children, Katherine and husband Brian Frizzelle of Chapel Hill, NC, Anthony and wife Bethany Gaul of Ames, IA, and Elisabeth and husband Michael Owen of Amity Harbor, NY; sister, Rebecca and husband Fritz Bohde; and grandchildren, Sean and Ethan Frizzelle. He was preceded in death by his parents, and mother and father-in-law, Ruth and Carl Boyles.