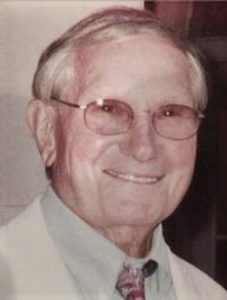 In addition to his parents, he was predeceased by a sister, M. Jean Miller, and a grandson, Lawton T. Miller.

Mr. Miller was educated in Florence. After attending The Citadel he graduated from Davidson College in 1942.

He joined the U.S. Army, achieving the rank of 2nd Lieutenant, and was a veteran of World War II. He met and married his wife Jo in 1950. He was a member of Central United Methodist Church.

Mr. Miller was the owner and proprietor of Miller’s Bootery from 1945 until his retirement in 1992. Mr. Miller was highly respected and warmly spoken of in the shoe industry. His keen eye for fashion, and an amazing facility for total recall was much admired by many, along with his wit and gentle manner.

He was kind and benevolent with all who knew and worked with him, and was appreciated for providing fashion conscious women of the Pee Dee area with quality footwear and apparel for many decades.

Among his greatest joys was following and attending the ballet performances of daughter Patricia Miller, along with a life-long love of classical music and opera.

Mr. Miller was active in sports, but was perhaps best known as one of the early aficionados of Half Rubber a modified version of pickup baseball played mostly on the beaches of the Carolinas.

His love of the beach went all the way back to the early 50’s, when he purchased a vacation home in Garden City Beach to enjoy with his family. It was here, through the decades, that Mr. Miller was happiest, when, as “Project Manager,” he doled out assorted tasks for all his children and friends, keeping everyone active and involved.

In his later years, Mr. Miller stayed in excellent health via his vigorous indulgence in gardening and yardwork, typified by day long sessions of clipping and watering, thus serving to provide a therapeutic outlet all the way to the ripe old age of 95.

A funeral service will be held in the chapel of Waters-Powell Funeral Home at 3:00 p.m., Sunday, March 19, 2017, with an open visitation time with the family immediately following.