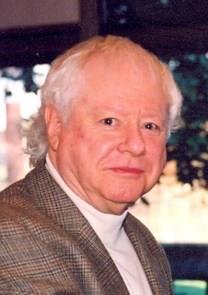 James L. Steele of Harrisonburg passed away March 8, 2017, at Brookdale Assisted Living after a lengthy battle with dementia.

Jim was born near Charlotte, N.C., in 1937 to the late Claude Steele and Kathleen Young Steele.

In addition to his wife, Jane Dinsmore Steele, he is survived by a stepdaughter, Jacqueline Dinsmore, and a nephew, Richard Griffin Jr. and his wife, Amy. His only child, Gregory Steele, and his only sister, Peggy Griffin, are deceased.

Growing up on his family’s small farm, Jim would rise at 4 a.m. to milk the family dairy cows. He and his sister learned to cook for the family, and Jim continued his cooking skills into his adult life, where his cheesecake was requested for various social functions. Every Christmas, he would spend an entire day creating a raspberry trifle, which could have been shown in any food magazine.

Jim was a good athlete, playing football, basketball, as well as being a standout on the high school wrestling team. In his adult life, he attended James Madison basketball and football games and also rooted for his favorite ACC basketball teams and the Washington Redskins.

In Jim’s senior year of high school, he was elected class president and also student body president, but had to choose between the two, selecting class president. Other honors included being voted “Most Original,” “Friendliest” and “Most Popular.” He kept in touch with his high school classmates, particularly his close friend, Thad Morrison.

After high school, Jim went to Davidson College, where he majored in English. He was an excellent writer and edited publications and books for sociology societies during his career.

Following college graduation, Jim chose to attend Wake Forest University, where he obtained a master’s in theology. For seven years, Jim pastored two Southern Baptist Churches, one in Charlotte and one in New Jersey. He often mentioned his greatest joy during those years was working with the young people in the church. Anyone who knew Jim was aware of his love for children.

Even after this most cruel disease had greatly affected his speech and personality, his face would light up when he would see children in the assisted living facility, and they always received a big smile.

Jim’s love of the West took him to Montana, where he studied and obtained a doctorate in philosophy from the University of Montana. Fishing and hunting were his hobbies during these years, and he often remarked about the beautiful rivers in Montana where he fly-fished.

Due to family circumstances, Jim returned to the East and found his home at James Madison University. It was there that he stayed for 35 years, teaching a variety of classes in sociology, as well as statistics and a class in the athletic department with Challace McMillan. He worked with the Honors Program and was a freshmen adviser for many years.

After retirement at age 71, he was awarded an emeritus status for his long service to the university that had been his home for so long. His name, along with others, is forever inscribed in limestone on the university quad.

Jim’s hobbies included running (he would run 10 miles on his birthday well into his 50s) and rock climbing with his son. He loved camping and traveled with his beloved Dodge Power Wagon (The Boss), pulling his camper, to favorite places like Colorado. Another hobby was fishing every fall at the Outer Banks. He would brag how The Boss pulled out many trucks stuck in the sand. The truck, over the years, became a minor celebrity wherever it went, and Jim drove it until it could no longer pass inspection.

In later years, Jim converted his love for hunting into helping animals. He dearly loved a “pet squirrel” he named Flippy and was devastated when it was killed in the road. A pet stray cat he let into the house was named KitKat, and later he had a rescue Siamese he called Taffy.

Every morning, even after his affliction became worse, he would dress before a city park opened its gates to take food to the homeless cats that were born and lived in the park. They became tame and watched for his car.

Not neglecting feathered “friends,” Jim carried his father’s love for raising exotic fowl over into keeping bird feeders and water baths filled for the birds, including hiding peanuts every morning for a family of crows. He was so tender-hearted, he could not bear to be present when a pet was suffering and had to be put to sleep. His yard was a burial ground for three favorite squirrels, one cat, and two guinea pigs.

Having been gifted with a beautiful voice, Jim listened to and collected all kinds of music. He directed the church choir while attending Mossy Creek Presbyterian Church. His other enjoyment were movies, his favorite form of relaxation, and he had a wide variety of films, some which he would watch over and over.

Jim was a generous and kind father, stepfather and husband, and his love for teasing, making friends with everyone he met, and his dedication to his many students over the years, will be greatly missed. He endured his last years of a terrible affliction with great courage and a strong will to live.

The family thanks the management and wonderful staff at Brookdale Assisted Living who saw to Jim’s needs for three years. They affectionately nicknamed him “Jimbo,” and he enjoyed teasing the staff as best he could communicate.

The family will receive friends at the Lindsey Funeral Home on Saturday, March 11, between 6 and 8 p.m. Burial will be private.

Any donations in Jim’s honor can be made to the Alzheimer’s Association, 1160 Pepsi Place, Suite 306, Charlottesville, VA 22901.

Online condolences may be sent to the family by visiting www.lindseyharrisonburg.com.