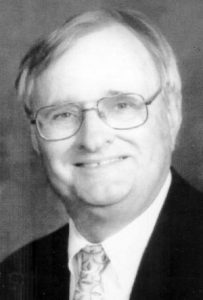 A service of remembrance celebrating his life will be held on Friday, March 31, 2017, at First Baptist Church of Greensboro, where he was a member, at 1:00 p.m. The family will receive friends follow the service at the church.

Mr. Patterson worked in college development starting in 1968. He has had direct involvement in eight successful capital campaigns at both large public and small and large private instructions. His fund raising experiences have covered academic, athletic, and the arts, and he had extensive experience in fund raising over a 45 year career.

Mr. Patterson graduated from Davidson College in 1961, where he majored in Psychology. He then served in the United States Army for two years, being honorably discharged at a First Lieutenant.

He began his fund raising career at Meredith College in 1968 as Director of Planned Giving, where he started the planned giving program during the time of the Tax Reform Act of 1969, which first established charitable remainder trusts and pooled income funds. He was also directly involved with Meredith’s first capital campaign. In 1971, he moved to the University of Richmond as Assistant to the President.

At Richmond, he established the University’s first planned giving program and played a key role in a $50 million campaign. While at the University, he was asked to testify before the House Ways and Means Committee of the U.S. Congress during hearings regarding Tax Reform.

In 1974, Mr. Patterson was named Vice Chancellor for Development at the University of North Carolina at Greensboro. While at UNCG, he provided leadership in all areas of Advancement, including responsibilities in fund raising, alumni relations, and university relations. It was during his tenure that UNCG completed its first-ever capital campaign during a period when public higher education was just beginning programs seeking private gift support.

From Greensboro, he moved to Wake Forest University to become Associate Athletic Director for Development where he led two major capital campaigns for athletic facilities and endowment. One of these campaigns included a co-operative effort with the City of Winston-Salem to build the Lawrence Joel Coliseum. In addition, he was extensively involved in university-wide capital campaigns.

In 1998, Patterson became Vice President for Advancement at Guilford College where he was asked to rescue a lagging campaign, which ended with 112% of goal.

Staff and advancement programs were built at Guilford as he again led a professional team in fund raising, college relations, and alumni relations. Patterson has written and lectured extensively during his career.

He was a long time member of CASE (Council for Advancement and Support of Education) and served on community chambers of commerce boards, rotary, and other church and civic organizations, including the North Carolina Sports Hall of Fame.

He was a principal of the Summer Development Workshop for over ten years. Patterson was the 2001 recipient of the National Association of Athletic Development Directors Fund Raiser of the Year recognition, the 2003 Guilford Distinguished Service Award, the 2004 recipient of the NC Triad Chapter of the Association of Fundraising Professionals Lifetime Achievement Award and in 2004 received the Greensboro, NC Mayor’s Certificate of Commendation for 37 years of advancement in Higher Education.

The family will receive friends following the service of remembrance at the church.

In lieu of flowers, memorial contributions may be made to First Baptist Church of Greensboro, 1000 W. Friendly Ave., Greensboro, NC 27401 or Davidson College or Wake Forest University. Hanes-Lineberry N. Elm St. Chapel has the honor of assisting the Patterson family.

Online condolences may be made at www.haneslineberryfuneralhomes.com.