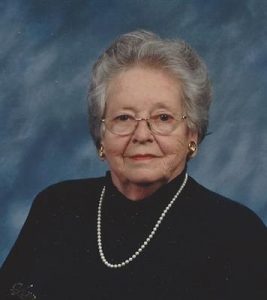 A native of Charlotte, Betty graduated from Old Central High School in 1945 and received her undergraduate degree in education from Salem College in 1950.

Betty married her childhood sweetheart, Dr. Basil Manly Boyd, Jr., on August 8, 1950, and spent the next 45 years supporting him in his career as a well-known orthopedic surgeon in Charlotte.

While Basil was in medical school and completing his residency and training, Betty taught second grade. After returning to Charlotte where Basil began his career, Betty raised five children while serving as a tireless volunteer in her community.

She was staunchly devoted to her church, Covenant Presbyterian, where she served in numerous roles, including President of the Women of the Church, Circle leader, and Elder Emeritus. She also placed a high value on education and served on the Board of Visitors for Salem College and Davidson College and on the Board for Charlotte Country Day School.

In addition to countless other volunteer jobs, she also served as the President of the Charlotte Women’s Medical Auxiliary and the PTA at Charlotte Latin School. Betty also loved spending time with her family at their home in DeBordieu Colony, South Carolina.

The family would like to extend a special thank-you to Teresa Anderson, Betty’s companion, care-taker and partner-in-crime, as well as the rest of the caring staff at the Stewart Health Center.

Betty is reunited with her husband, best friend and soul-mate, Dr. Basil Manly Boyd, Jr., who has been patiently waiting for her for 22 years and two days. He is ready with a cold rum and tonic in hand and a window with a view of their children, grand-children and great-grandchildren.

A memorial service will be held Monday, April 3, 2017, at Myers Park Presbyterian Church at 11:00 am, following a private interment. The family will receive friends in Oxford Hall following the memorial service.

Memorials may be made in Betty’s memory to the Alzheimer’s Association or to Salem College in Winston-Salem, NC. Hankins & Whittington Funeral Service is assisting the family of Mrs. Boyd.