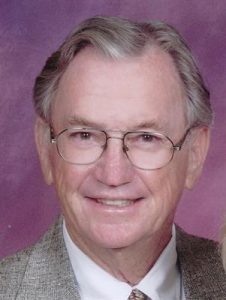 The Rev. Dr. Charles LaRue “Chuck” Kirby died on February 5, 2017 after a long struggle with dementia. Even as illness clouded his mind, this retired Presbyterian pastor’s deep faith and good cheer prevailed.

He was a happy man who loved the Lord, his wife Charlotte, and his family. Could there be a sweeter legacy? He was 89 years old. He was born on December 17, 1927, in Fort Pierce, FL, the fourth of James Alfred and Emma Jerman Kirby’s seven children.

In 1944, he was on a music scholarship to a Queens-Davidson Music Camp. While there, he needed surgery which was performed by Dr. Thomas D. Sparrow. They became great friends, and then family as Dr. Sparrow adopted Chuck as his foster son. Chuck graduated from Central High School, and Davidson College, where he heard God’s call. He graduated from Union Theological Seminary in Richmond, VA, and was ordained by the Presbyterian Church in Oct. 1953.

So began ministry for a man who loved every facet of the pastor’s life. Chuck connected with youth, had a gift for saying the right thing to people during hard times, and hungered to learn more about the Bible. He always performed beautiful weddings, his voice so tender and personal.

Chuck’s first call to lead four small churches in Sampson County changed his life. While serving a congregation near Tomahawk, NC, he was smitten by one of the congregants, Charlotte Murphy, a senior at the Woman’s College of the University of North Carolina. They were married in 1955, a union whose love was captured in a letter Chuck wrote his wife on Christmas Day 1963: “My Darling Charlotte, Christ has put many blessings on me in my few years. You I prize and rejoice in the most.” Charlotte, of course, has saved the letter in a special box.

Two years after they were married, they spent a year in Scotland with their one-year-old son, Tom, while Chuck studied at the University of Edinburgh. Upon returning to the states, Chuck was called to First Presbyterian Church in Morehead City, NC where he served for eleven years. While there, he received the Distinguished Service Award from the Jaycees for his work with the Migrant Ministry and served as Moderator of Wilmington Presbytery. While in Morehead City, the Kirbys’ two daughters, Anne and Frances were born.

In 1970, Chuck received a call to Caldwell Memorial Presbyterian Church in Charlotte. While serving there, he earned his Doctor of Ministry Degree from McCormick Seminary in Chicago, and served as Moderator of Mecklenburg Presbytery.

Such sweet memories: The annual week at the beach with all of the family at Wild Dunes; Saturday morning tennis games with his buddies at Charlotte Country Club; Sunday morning worship with congregants; getting down on all fours to play with the grandkids. All they had to do was ask and Chuck was happy to oblige.

No life is free of pain. Chuck and Charlotte lost their middle child, Anne Kirby Barnhardt of Greensboro, to breast cancer in 2012. She was 46 years old. Anne inherited her dad’s joyful disposition. Her brother, Tom, used to say that the party never started until Anne arrived.

A gift in his memory can be made to the Thomas D. Sparrow athletic scholarship at Davidson College, PO Box 7170, Davidson, NC 28035.

The family offers its deepest thanks to the staff of Sharon Towers, and Hospice & Palliative Care who showed so much love and care to Chuck and Charlotte. Also, thanks to David Lowery, Jim Lawton, and Allan Seidman for their assistance, and to Rev. Dr. Tony Tucker, and David Barnhardt for their frequent visits.

Robertson Funeral and Cremation Service is taking care of the family. Online condolences can be shared at www.throbertson.com.

Published in Charlotte Observer on Feb. 8, 2017