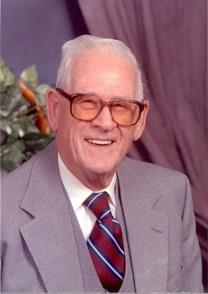 Paul Adams Horne, 93 years old of Hurst, TX went to be with our Lord on Friday, January 6, 2017 after years of declining health.

Paul Adams Horne was born on December 5, 1923 in Chapel Hill, NC to Grady Floyd Horne and Katherine Mannes Horne. Paul was orphaned at the early age of 22 months and he was accepted into the Barium Springs Orphanage in North Carolina. He spent 16 ½ happy years at Barium receiving his early training, his elementary, and high school education. He graduated from Barium High School in 1942.

Later in that year he was drafted into the U.S. Army and served in World War II for three years from 1942-1945. He graduated from Davidson College, Davidson, NC in 1949 and Union Theological Seminary in Richmond, Virginia in 1953. Paul became an Ordained Presbyterian Minister in July 1953 and he served seven churches full time from 1953-1989 in North Carolina, South Carolina, and Virginia. He served as Associate Pastor of Spotsylvania Presbyterian Church in Fredericksburg, VA from 1991-2002.

Paul and his wife Ella Mae moved to Texas in 2002 to be close to their daughter Kathy McGee of Grapevine, TX. He was a member of Grace Presbytery and served as pulpit supply in several churches before his health began to decline.

Paul was active in the First Presbyterian Church in Grapevine, TX where he was Chief Greeter from 2002-2016. Paul loved people and his main desire was for people to be greeted and made to feel welcome at home when they came to church.