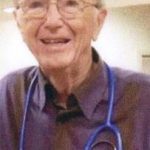 Dr. James (Jim) Comer Gaither, Sr., passed peacefully at his home in Newton, North Carolina, Sunday evening at 10:30 pm, January 15th, 2017. Dr. Gaither suffered from Leukemia and was taken home to our Lord after an extended battle with the illness.

Dr. Gaither loved the community where he was born, and he returned following medical school with his beloved wife Rachel to found his medical practice and raise a family.

Dr. Gaither attended Newton Conover High School and graduated in 1953. Jim went on to attend Davidson College where he majored in Biology and graduated in 1957. While attending Washington University Medical School in St. Louis Jim met the love of his life and his wife of 57 years, Rachel Cole.

Before returning to begin his practice as one of the youngest physicians at the newly constructed Catawba Memorial Hospital, Jim served in the United States Army where he was stationed overseas in Germany with his wife and young family.

Dr. Gaither opened his internal medicine practice with his friend and partner Dr. Arthur Lynn directly across the street from Catawba Memorial Hospital. After Gaither and Lynn were joined later by the late Dr. Edward Boone it was estimated that at one time the three physicians of Gaither, Lynn and Boone had over 20,000 Catawba County residents that called these physicians their doctor.

The medical practice of Gaither, Lynn and Boone continued to grow and eventually relocated under the name of Catawba Valley Internal Medicine. Dr. Jim Gaither admired and respected his colleagues and had the privilege of working with the fine men and women who make up one of the most respected medical communities anywhere.

Dr. Jim Gaither served on numerous boards and committees and was always available to serve the community he loved so much. He was a lifelong member of First Presbyterian Church of Newton. He shared a love of sports both as a participant and observer.

His humble and giving nature, his sharp wit and his enduring friendship and loyalty will be greatly missed by the many who knew and loved him.

Dr. Jim Gaither is survived by his loving wife, Rachel Gaither and by his brother and lifelong friend, Albert Gaither. Jim and Rachel Gaither had three children and eleven grandchildren.

A Memorial Service will be held on Saturday, January 21, 2017 at 11:00 a.m. at First Presbyterian Church in Newton. The Revs. Connie Button, Fred Thompson and Smith Sharpe will officiate. The family will receive friends following the service in the church fellowship hall.

Memorials may be made to First Presbyterian Church, 701 N. Main Avenue, Newton, NC or the charity of one’s choice in the name of Dr. James C. Gaither Sr.