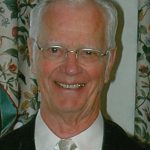 He was a life long resident of Rogersville until May 2016 when he moved to Baysmont in Kingsport.

He graduated from Rogersville High School as salutatorian, attended Davidson College and graduated from the University of North Carolina at Chapel Hill with a degree in Commerce.  He served in the U.S. Navy during World II.

He was co-owner of Testerman Motor Company for 54 years.  He served as Rogersville City Alderman and Hawkins County CommisSioner.

He was a deacon, elder, Sunday school teacher and trustee of Rogersville Presbyterian Church.  He was chairman of the board of trustees at McKinney Cemetery.  Mr. Testerman was a past member of the Inner Church Council.

In lieu of flowers memorial contributions may be made to Rogersville Presbyterian Church, 309 W. Kyle St., Rogersville, TN 37857

Online condolences may be made at www.broomefuneralhome.com