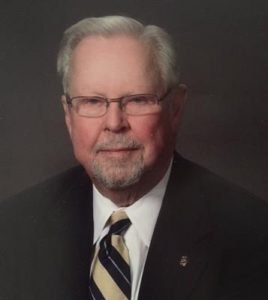 Charles Liddell Norwood, Jr., passed peacefully into heavenly hands on the evening of August 19, 2016. He was born September 7, 1929, son of Liddell and Jemima (Jem) McGuirt Norwood of Monroe.

Charles was a graduate of the Monroe City School System and in 1951 received a BS in Business and Economics from Davidson College, where he was a member of Sigma Chi Fraternity. He attended graduate school at the University of Virginia and completed the Executive Program at the University of North Carolina.

After college, he served as a First Lieutenant in the United States Army during the Korean War.

Charles was a Rotarian and committed to the creed of Service Above Self. He was a lifelong member of First Presbyterian Church where he served as Deacon, Elder, and a member of the Chancel Choir for over sixty years. In 2008 he was elected an Elder Emeritus. He served as Moderator of Mecklenburg Presbytery, Chair of Council of the Presbytery of Charlotte, and Chair of Local Arrangements for the 2010 General Assembly, Presbyterian Church USA.

Retired as the Executive Vice President of Branch Banking and Trust, formerly United Carolina Bank in 1994 after 38 years of service, he continued his active role in civic and charitable affairs in Union County and the region.

He served on the Hospice of Union County Board for many years. He was president of Lion’s Club and Jaycees in his earlier years of service.

He was honored on many occasions. In 1963 he was the Jaycees Young Man of the Year. In 1975 he was named Union County Man of the Year. He was awarded the Enquirer-Journal’s first Lifetime Achievement Award. He was roasted at fundraisers for Turning Point and Monroe Rotary Club.

He was honored with Lifetime Achievement Award in 2014 by the Union County Chamber of Commerce. He was also a gifted speaker and was asked to speak at many functions. Always witty and wise, he spoke extemporaneously on many subjects. His personal creed was to provide random acts of kindness.

Predeceasing his death was his beloved wife and partner for 51 years, Vivian Hinson in 2005 and his son, Chuck in 2008. He is survived by his daughter, Donna, his son Jimmy and wife Kim, son William and wife Joan, and his grandchildren Allison Pueschel and husband Karl, Laurel, Paul, Charlie Frank and Marianna Norwood. He was blessed with three great-grandchildren Raleigh Grace, Savannah Jane and George Vann Pueschel.

A celebration of his life will be held 11:00 AM at First Presbyterian Church in Monroe on Monday, August 22, 2016. Burial will follow in Lakeland Memorial Park.

Gordon Funeral Service & Crematory is caring for the Norwood family.

Online condolences may be made at www.gordonfuneralservice.com.