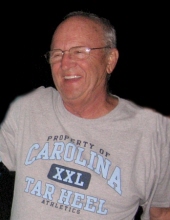 He was born Sept. 25, 1938, in Charlottesville, Va., the son of Charles Hampton Mauzy Jr. and Elizabeth Thaxton Mauzy.

Mr. Mauzy was a member of Parkway Presbyterian Church in Winston-Salem where he was a deacon, a member of the choir and a Sunday school teacher.

He was a 1956 graduate of R.J. Reynolds High School and attended Davidson College and Wake Forest College. He was a graduate of the University of North Carolina at Chapel Hill and attended the University of Virginia School of Law and Wake Forest Graduate School. He taught school at Glenn Junior High School from 1962 until 1969 and worked for the National Education Association from 1969 until his retirement in 1990.

Survivors include his wife of 53 years, Marji Mauzy; a daughter, Perry Richardson Mauzy of Pawleys Island; two brothers, John Thaxton Mauzy and his wife Betsy of Harrisonburg, Va., and William Clark Mauzy and his wife Carrie of Sewanee, Tenn.; a sister-in-law, Phyllis Graham and her husband Jack of Kitty Hawk, N.C.; and several nieces and nephews.

Sam and Marji were planning to relocate to the Lakes at Litchfield. A celebration of his life will be held Sept. 25 at Litchfield Beach.

Condolences may be sent at goldfinchfuneralhome.com.