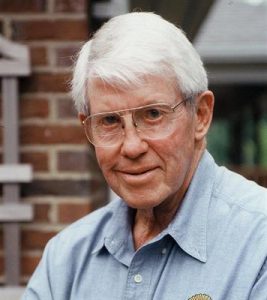 He volunteered at age 18 to serve in the US Army Air Force and was called to active duty in January 1943. After being commissioned as a 2nd Lieutenant, he served as a P 51 fighter pilot with the United States 8th Air Force in Europe until his return in April 1945.

While in combat he received the Air Medal with 1 oak leaf cluster. After the war, he returned to Davidson College and graduated in July 1947. Upon his graduation he was employed by Washington Mills Company, a textile manufacturer.

He married the former Cora Cox Lucas in November 1947, and together they moved to Fries, Virginia, where he became General Manager of Washington Mills weaving division from 1947 to 1973, when he was transferred to Charlotte NC. Together, they raised 5 children in Fries: Betsy, Cynty, Margaret, Sally and Johnny.

Within 3 years of moving to Charlotte, John lost his wife of 29 years, and his job of 26 years, as Washington Mills declared bankruptcy. As was characteristic of his inner strength and resilience, he created a new life for himself, by finding a new career as co-owner of Lucas Travel Agency, and finding a new partner, Eugenia McCray Vanstory, whom he married in December 1978. This chapter of his life was as fulfilling and rewarding as his earlier life in Fries.

John’s hobbies were numerous. He was an avid fisherman and small game hunter all of his life, and a long time member of Camp Bryan, a hunting and fishing club in eastern North Carolina. His children and grandchildren learned their earliest lessons about the outdoors from him. They were especially thrilled by his skills at handling snakes and knowing where to look for alligators at Camp Bryan.

He enjoyed travel, squash and tennis, particularly with the distinguished “old men’s” doubles group (all over the age of 80) at the Charlotte Country Club.Perhaps his greatest passion in later life was woodworking, with a focus on building 18th Century American reproductions.

In a 35 year span he made over 100 pieces of furniture for his family and friends. He was a charter member of the Society of American Period Furniture Makers, and in 2001, received their prestigious Cartouche Award for lifetime achievement in making period furniture. As a self-taught cabinet-maker, he was one of few amateurs to win that award.

Pictures of his work have appeared in many publications, including The Charlotte Observer, and Fine Woodworking, where his Newport secretary/bookcase was featured on the back cover. Another of his pieces was chosen for the 2006 exhibit of Contemporary Classics at the Telfair Museum of Art in Savannah, Ga., the first collection of reproductions exhibited in a major art museum.

He was a charter member of the Charlotte Woodworkers Association, a member of Charlotte Country Club, the Piedmont Club of Charlotte, and Christ Episcopal Church.

John will be remembered by many for his kindness and his humor. His children and grandchildren have treasured his adventurous spirit and his capacity for telling stories. They will carry on his love of wildlife and the outdoors. His legacy of beautiful furniture will be appreciated for many generations.

His great strength in the face of adversity, and the courage and grace he showed as he approached the end of this life sets an enduring example for all.

He is preceded in death by his second wife, Eugenia and his daughter, Cynty. He is survived by Betsy McAlister Groves her husband Tim and two daughters Jeanie and Rebecca; Margaret McAlister and Reed Olszack, her sons David and Alexander Jamison; Sally Marszalek, her husband Fred, and two sons Tucker and Benjamin; and John Worth McAlister III, daughter Mary Beth and son John Worth McAlister IV; step daughter Leigh Vanstory Poe, her husband Tom and daughter, Caroline; step-son Peter Vanstory; step-grandchildren Courtney DeTemple and Stuart Poe.

The family expresses deep appreciation to the staff of the Cypress of Charlotte and to the Hospice & Palliative Care, Charlotte Region.

Memorial gifts may be made to the McAlister Educational Endowment Fund, Society for American Period Furniture, c/o Charles Watson, 14 Deer Trail Circle, Oxford, OH 45056; or to the North Carolina Nature Conservancy, in the name of John W. McAlister, member id: 1003795456. Online condolences may be shared through www.tallentfuneralservice.com.

Published in Charlotte Observer on May 24, 2016