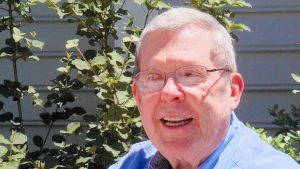 The Ruxton resident was 81. The son of Cecil B. Bishop Sr., a dry cleaner, and Virginia Elizabeth Wilson, a homemaker, Cecil Brown Bishop was born and raised in Hickory, N.C., and graduated from public schools there.

He earned a bachelor’s degree in English in 1956 from Davidson College in North Carolina, then went to work as a sales representative and assistant personnel manager for the Southern Desk Co., and also served as the company’s Mid-Atlantic regional representative.

Mr. Bishop joined Alex. Brown & Sons in 1964 as a stockbroker. In 1975, he was promoted to sales and branch manager of its Towson office. He retired in 1999. From 1981 to 1994, he was a board member of Family and Children Services of Maryland; he was its president from 1991 to 1993. He also was a board member and treasurer of Presbyterian Home in Towson for several years, and had been chairman of the Egenton Home in Mount Vernon from 1982 to 1987.

Mr. Bishop played a role in the 1990s in helping secure for the Maryland State House the sword that Tench Tilghman, aide-de-camp to Gen. George Washington, carried on his ride from Yorktown, Va., to the Continental Congress in Philadelphia to announce the British surrender in 1781.

“The sword is prominently on display alongside the Charles Willson Peale portrait of Washington, Lafayette and Tilghman in the Old Senate Chamber,” said Joseph M. Coale III, a Ruxton writer and Maryland historian who was a longtime friend of Mr. Bishop’s.

A member of Alcoholics Anonymous, Mr. Bishop died on the 28th anniversary of his sobriety.

He was an active member of First & Franklin Presbyterian Church and served on its board from 1973 to 1982. He helped guide the church through a 1980 restoration.

He was a fan of Davidson and Duke University basketball and an avid tennis player.

A memorial service will be held at noon Saturday at his church, 210 W. Madison St., Baltimore.

He is survived by a son, Carter W. Bishop of Hong Kong; a daughter, Deborah B. Fox of Towson; his companion, Jeannie Trout; and three grandchildren. Three marriages ended in divorce.

Mr. Bishop played a role in helping secure for Maryland a sword belonging to an aide to Gen. George Washington.