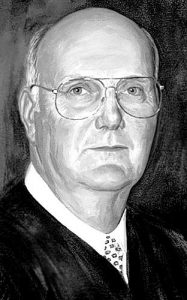 The Honorable John Buford Grier, Sr., died Monday, May 9, 2016 at Carolinas ContinueCARE Hospital in Pineville, N.C. Son of William H. Grier, Sr. and Lila Atkinson Grier, was a 1956 graduate of Winthrop Training School and a graduate of Davidson College, class of 1960. He received his Law Degree in 1963 from the University of South Carolina School of Law.

After graduation, he served in the U.S. Army with the Judge Advocate General’s Corps from 1964-1967 in Fort Lee, VA. Upon returning to South Carolina in 1967, he was an attorney with Springs Industries in Lancaster, SC. and then practiced law in Rock Hill.

He was appointed by Governor Carroll Campbell as York County’s first Master-in-Equity in 1991, until retiring in 2003. Judge Grier was a past member of Executive Council Fee Disputes Board and past Chairman of the Sixteenth Judicial Circuit Resolution of Fee Disputes Board. He enjoyed scuba diving, traveling, and being with his four grandchildren.

Memorials may be made to the American Red Cross, Oakland Avenue Presbyterian Church or the charity of the donors choice.

Copyright, 2016, The Herald, a division of East Coast Newspapers, Inc.