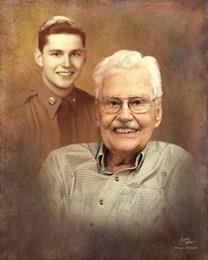 He is predeceased by his wife of 47 years, Shirley (Voll). He is survived by his son, Garry Eldridge and daughter-in-law, Shannon; granddaughter, Ashley O’Flynn and great-granddaughter, Natalie O’Flynn; daughter, Tammy Cantrell and son-in-law, Brian.

He was born and spent his younger years in the mountains of Glade Valley, NC. He is a proud graduate of Davidson College in NC with a degree in business. He wore his college ring until his death.

He was drafted into the U.S. Army and served during the Korean War. He held jobs in a five & dime store and sold insurance until he landed a job in Louisville, as a sales representative. He received recognition for selling the most floral foil one year and having a perfect driving record. He retired after 30 years of service and enjoyed 32 years of retirement.

He married Shirley Voll on November 24, 1955. They enjoyed a happy marriage for 47 years which produced two children, Garry and Tammy, who now have their own beautiful families.

He was an active member of Southeast Christian Church for over 35 years where he served as deacon. George is known for his storytelling, jokes, tricks, and poem writing. He loved to share his life with others and make them laugh.

He was a loving and caring man anxious to help his neighbors and those in need. He spent many of his retirement years assisting the elderly with their daily living so they could remain in their homes. He did this on his own, not through any type of government agency.

In his later years, he moved to Oldham County, Ky and enjoyed being near his daughter and son-in-law and talking to his new neighbors and friends. He joined Sligo Baptist Church and was a faithful member until his death.

George will be missed by all, especially for his jovial nature and smile.

An American Sign Language interpreter will be provided for the Celebration of Life service on Friday.

Expressions of sympathy in lieu of flowers may be made to his church, Sligo Baptist Church. Friends may sign his guestbook at www.archlheadyresthaven.com