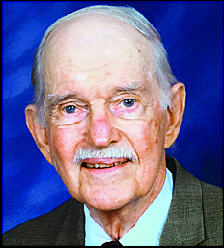 Dr. Charles MacDonald “Don” Coffey III, of Davidson, NC, died Wednesday, November 11, 2015, at the Pines Retirement Community in Davidson. He was born November 16, 1927, in North Wilkesboro, NC, son of Charles MacDonald Coffey Jr. and Martha Lura Finley Coffey.
Don attended McCallie School and received a BS in Business from Davidson College in 1949, where he was Phi Beta Kappa and received the Algernon Sydney Sullivan Award. He was a Second Lieutenant in the US Army Reserve from 1949 to 1954 and was in business with his father.
He married Ruth King Wood Coffey on December 21, 1951, in Low Moor, VA. Don attended Union Theological Seminary in Richmond, VA before Ruth and Don were called to Ridgecrest and Oakboro Presbyterian Churches in Stanley County, NC where they served until Don returned to Union Theological Seminary and received a Master and Doctor of Theology in 1964. Don was called to serve at Erskine Theological Seminary in Due West, SC where he was Professor of Biblical Theology and Christian Education.
In 1980, Ruth and Don retired to Davidson, NC and were very active at Davidson College Presbyterian Church and in the community. Ruth and Don moved to the Pines Retirement Community in 2005.
Throughout his retirement, Don continued to work as an Investment Manager with the Christian Social Justice Fund through which he invested in the stock market in order to make generous gifts to various global hunger relief and social justice organizations.
Don continued this investment work until his death and enjoyed teaching his friends and family about his philanthropic philosophy so that they might continue his work.
In 2011, Don was preceded in death by his beloved wife of 60 years, Ruth.
Don is survived by his children, Elizabeth Ann “Betsy” Coffey Massey and husband, Richard; Stephen MacDonald Coffey and wife, Beth; Charles Welton Coffey and wife, Susan; Carol Blanton Coffey-Howard and husband, Stephen; as well as nine grandchildren and one great-grandchild.
A Memorial Service will be held Saturday, November 14, at 3:00pm at Davidson College Presbyterian Church. A reception will follow.
In lieu of flowers, please send memorials to: Church World Service, P.O. Box 968, Elkhart, IN 46515; Presbyterian Mission Agency, 100 Witherspoon St., Louisville, KY 40202-1396; or JHC-CDCA, c/o 352 Carly Ln., Rock Hill, SC 29732.