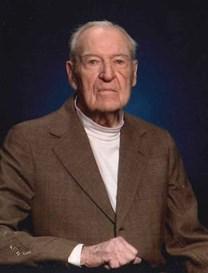 Thomas Wilson Mullen, Jr., 98, passed away on Thursday, October 8, 2015, at Summit Square in Waynesboro, Virginia. He was born on May 23, 1917 in Rosemary, North Carolina (now Roanoke Rapids), to the late Thomas Wilson Mullen and Ida Andrews Mullen. He was preceded in death by his wife, Susan Britt Mullen; son, Henry Britt Mullen; and two sisters, Evelyn D. Mullen and Priscilla M. Gowen.

He graduated from Roanoke Rapids High School in 1935 and Davidson College in 1939. He was employed by DuPont as a chemist in 1940, and, after nearly 42 years of service in technical and management positions, retired on January 1, 1982.

He was a long time member of St. John’s Episcopal Church, where he served on the Vestry and finance committee.

A memorial service will be held at 10:00 am on Monday, October 19, 2015, at St. John’s Episcopal Church in Waynesboro, conducted by the Rev. Kim Webster. Internment of Tom’s ashes at the church Memorial Garden will immediately follow the service. The family will receive friends at the church hall following the internment.

In lieu of flowers, memorial contributions may be made to St. John’s Agape Fund, P.O. Box 945, Waynesboro, VA 22980, or to a charity of your choice.

The family wishes to thank the special staff and nurses at Summit Square for the love and care given to Tom while he was a resident.

Reynolds Hamrick Funeral Home in Waynesboro is serving the family. Relatives and friends may share condolences and memories with the family by visiting www.reynoldshamrickfuneralhomes.com