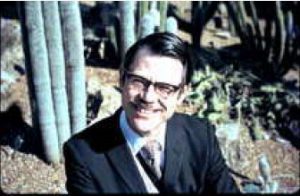 James Herbert Gailey was born in Atlanta, Georgia on October 17, 1916 and died peacefully in his sleep on October 17, 2015. During his 99 years, he was a scholar, theologian, educator, social activist and environmentalist.
A graduate of O’Keefe and Boys’ High in Atlanta, he continued his passion for higher learning with studies at Georgia Tech, Davidson, Columbia Theological Seminary, and finally at Princeton University where he received his Doctorate of Theology.

He married his first and only wife, Virginia, in May of 1949 and with her raised a family of two children, Landen and Bryan, in Decatur, Georgia. He began his affiliation with the Presbyterian Church as a pastor, first at First Presbyterian Church in Brewton AL, and then at Evergreen Presbyterian Church in Evergreen AL.
These posts led to a professorship at Columbia Theological Seminary in Decatur Georgia, where he taught Old Testament and Ancient Languages for 30 years.
Passionate travelers, he and his wife explored the world, with sabbatical studies in Heidelberg Germany, Berkeley California, and Ibadan Nigeria, as well as artisan workshops at Ghost Ranch in New Mexico and the John C. Campbell Folk School.
With the Institute for Mediterranean Studies, he led a summer archeological dig at Tel Zeror, in Israel, along with continuing studies at the Hebrew University in Jerusalem. Additionally, he and his wife traveled for pleasure to Europe, Scandinavia, Russia, the Middle East, Australia and South America.

He and his wife Virginia retired to Brevard North Carolina in the early nineties, where he pursued his passions for environmental causes, political activism and furniture building. His community of friends in Sherwood Forest was central to him, and he was active in the Woodcutters, the Memoirs Group, the Green Areas Committee, and a regular contributor to the Instant Culture lecture series.
He will be greatly missed by his immediate family, Landen Gailey, Benny Elliot, and Bryan Gailey, as well as many friends locally and abroad.

Memorial donations can be made to the Sierra Club, Doctors Without Borders, and the Southern Poverty Law Center, all of which he generously supported.

A memorial celebration for James will be held at 2pm on November 14th at Trinity Presbyterian Church, 900 Blythe Street in Hendersonville NC. All are welcome.