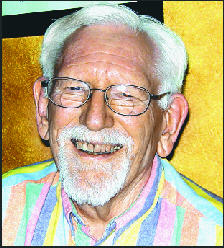 Leon Joseph Simmons, Jr. of Denver, Colorado, died at St. Joseph Hospital in Denver, on June 29, 2015, from complications from pneumonia. He was 83 years old.

Leon Joe was born on December 15, 1931 at home in Mt. Olive, NC. He graduated from Mt. Olive High School and from Davidson College, in Davidson, NC in 1955 with degrees in accounting and psychology. Leon Joe graduated from Union Theological Seminary in Richmond, Virginia in 1959.

Leon Joe worked for the Juvenile Court in Charlotte, NC, and in retail sales at J.C. Penney and other stores. Leon Joe also worked independently as a piano technician for more than three decades.

A few years after his sister Sally moved to Denver, she helped Leon Joe to relocate to Denver in the late 1980s. Leon Joe lived in downtown Denver and worked in apartment management until his retirement in 1993. In 2009, Leon Joe moved to the Drehmoor Apartments, a senior community in downtown Denver. He enjoyed his “feline roommate,” Alley Cat, and reading about news and politics and working on his computer.

Cremation by the Monarch Society of Denver took place in early July 2015, and Leon Joe was buried in the Simmons family plot at the Maple-wood Cemetery, in Mt. Olive, NC. The family is grateful for remembrances, but declines flowers. Donations to Davidson College are appreciated: Davidson College, Box 7174, Davidson, NC 28035-7174

To view this obituary online with the Monarch Society and sign a guest book and leave a comment, please go to: http://www.monarchsociety.com/.