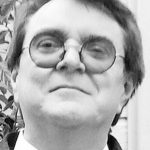 Walter Kyle Maus of Chicago, formerly of Reidsville, passed away on January 7, 2015.He was born on June 2, 1958, in Ft. Pierce, FL. He was predeceased by his father, Bobby Wayne Maus.

A memorial service is planned for Saturday, January 17, 2015, at Wilkerson Funeral Home in Reidsville at 3 p.m.

Survivors include his wife, Mary Lukas of Chicago; his birth mother, Sandra Isaacs, and step-mother, Donna Thompson Maus, both of Reidsville; brother Marc Maus (Trudy) and their daughters, Maggie and Carly; step-brothers Randall Robinson, Jr. of Raleigh, and Ben Robinson (Crystal) and children Kaylah, Alex, and Serenity; ‘special daughter’ Elizabeth Sonnen-Maus of Chicago; step- grandmother, Janice B. Sharpe and dear friend, Terri Beckham, of Nashville, as well as many loving aunts, uncles, cousins, and dear friends who were ‘family.’

Kyle spent most of his childhood in Reidsville. A Reidsville High School graduate, he obtained a bachelor of arts degree from Freed-Hardeman University in Henderson, TN. Kyle was an expert in the wireless network field, systems integration and network security. He was Senior Network Engineer at the National Association of Realtors in Chicago since 2012, and Network Engineer at Sidley Austin LLP in Chicago for several years prior to that. He was a member of the prestigious Institute of Electrical and Electronic Engineers (IEEE). Kyle had diverse interests, like his father.

He was very involved in Boy Scouts and the various activities associated with scouting. He was also a trainer with the athletic teams at Reidsville Senior High School when he attended Davidson College. He played French horn in the high school band, which led to his great love for a variety of music. He particularly loved Beethoven’s Diabelli Variations. He also loved opera and soft jazz. He looked forward to returning to North Carolina every year he was able, to help with the annual Brunswick stew at his Dad’s and Donna’s home the Saturday before Thanksgiving, until that tradition stopped in 2010.

He was a member of the Art Institute of Chicago and relished spending time there with Elizabeth and friends. He also loved exchanging bread recipes with his dad and averaged baking two loaves per week that he would share with friends and coworkers.Most Sunday afternoons, he and Elizabeth would have the good bread that he baked and sometimes a special rice that he made for her with dried sweet potatoes and flax seeds. The recipe varied but was always delicious. After they’d eaten, they’d watch ‘Poirot’ on PBS or any of the Masterpiece Theatre classics.Kyle was an avid reader from an early age and he enjoyed a variety of subjects. His favorite magazine was ‘The Economist,’ and he loved discussing various topics from it.

He was also deeply interested in the stories of American wars and war veterans, and religious studies.Kyle loved collecting the newest high-tech gadgets and phones, and was practically unbeatable playing Words with Friends, according to Terri. Kyle was here in August 2014 to eulogize his father, and none of us expected to lose one so special so soon after his father’s passing. There has never been a better friend than Kyle. If someone he cared about was in need, he would find a way to help, no matter the circumstances. He held a special place in many hearts and will be greatly missed.